Hector is a beautiful German Short-haired Pointer born in Australia. He currently resides in Singapore. His hair is the color of roasted chestnuts,  his nose is like soft leather and his ears feel like velvet. Hector’s frame is lean and muscular. His arms and legs are long. He has beautiful brown eyes that glow in the night and shine in the sun. He is well-trained and kind towards humans and animals alike.

Hector lives a very privileged life  on the island of Singapore. He lives in a high-rise facing the ocean in an upscale suburban area. He attends daycare 5 days a week and spends his weekends socializing with other dogs at the exclusive Tanjong Beach Club on Sentosa Island.

His father/owner Ed is an executive in Singapore. His loves are traveling and most of all Hector. When Ed transferred jobs to Singapore, he picked a place that offered amenities Hector could enjoy. While traveling during the Christmas holiday, he chose me to watch after Hector for 2 weeks. It was the best decision he could have made. This was a perfect match.

I fell in love with Hector the moment I met him. We built a bond by going on long walks  filled with new sights, smells and a ton of treats. Hector has a very easy life and I loved living it with him. We were two suburban free birds.

The day started around 7am with wet kisses from Hector. He takes a long downward dog stretch before going outside.  After an early morning walk, he has hot toast and butter for breakfast. During the walks he was always complimented by various strangers of his beauty. A couple of hours later we would venture out to Starbucks.  I got coffee while Hector drank triple filtered water in his own Starbucks cup. Some days we played ball in the sea and later played fetch the ball. 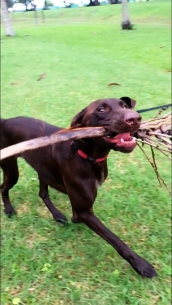 Playing with a palm stick

Hector in the sea 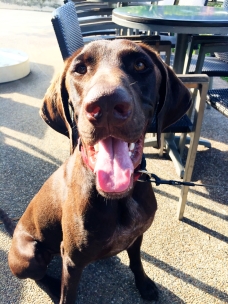 When we got back home we were both hot and tired.

While walking at night he was amazed at the little things, like frogs and lizards.  Stopping to check them out and standing off waiting for them to make a move.

He was my little king. Only the best for Hector was my motto. We developed an unspeakable bond and spent all day together. At night we watched crime shows and cuddled. We even have the same size hands and feet.

He was like a little cuddle bug horse full of kisses. Water with 2 ice cubes, unlimited hugs and warm towels to dry off after a bath were just a couple of little luxuries I could think of he might like.

Along with being pampered he was also helpful. He loved being included in everything. Whether it was working on my computer, doing laundry or serving food, Hector made sure he was around, eager to help out and involved.

Hector being a part of

Hector being a part of

As with all fun and games comes a little drama. One day while frolicking in the grass, Hector stepped on something sharp and cut the webbing in his paw. He was rushed to the emergency vet via Über. He was loved from the moment he arrived. Everyone in the waiting room gave him strokes of love and attention until he was seen. The doctor sedated Hector and gave him 3 dissolvable stitches. High as a kite, he was loaded back into an Über car waiting to take him home.

Hector – 3 stitches in his paw

Resting from his stitches

His next few days were filled with extra special attention. Thanks to us having the same size feet, he borrowed  my sock to cover his injury and used one of his own pooh bags to cover it during gentle walks. (On a high note, I took full advantage of Ed’s imported coffee direct from Cuba while we were homebound. That was a highlight of the day.) 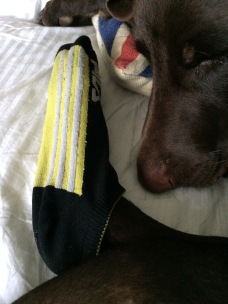 Hector with a sock on his injured paw

On the second night during a walk, Hector stopped short and sniffed in the area. No matter what I did to get him to move he stayed still in that exact spot. Hector was pointing out what exactly had cut his foot two days prior. I shined my iPhone light on the ground and there it was!  A piece of broken glass! I was astonished at the intelligence and amazed at his memory of where exactly this accident happened.

After 5 days of recovery Hector had his mojo back and was taking long walks in the sun without his foot wrap.

I found myself counting the hours until Ed came home and found myself really sad. I explained to Hector at length about heartbreak and heartache.  By the look in his eyes, I think he understood.

When Ed returned and walked through the door, Hector jumped on him and covered him with kisses and hugs. The unconditional love & loyalty was overflowing. It was a great feeling to see him so happy.  It was like he hadn’t seen Ed in years.

Watching after Hector taught me many things. I realized that he understood more than I thought and he experienced some of the exact same feelings as humans do. Love, patience, acceptance were the 3 things Hector taught me.  I could read his moods and request just by looking at his eyes.

This was an experience I will never forget. I will always carry the love I had in my heart for him during this Christmas holiday. I’m forever grateful to his owner/father Edward for trusting me with his most prized possession.  It makes me think of a line in  the movie Ghost (starring Patrick Swayze and Whoopie Goldberg). [At the end right before he ascended to heaven, he told his wife] “It’s amazing. The love inside, you take it with you. See ya.” Thats I how I felt about Hector.