The cost for a roundtrip ticket on a speedboat from Sinhanoukville is $12.50 (USD) per person through Speed Ferry Cambodia. The announcement came that it would be 45 minutes late because of technical problems.  Sitting in hot weather with all our luggage wasn’t fun. After the boat arrived, we were told there were more mechanical problems.  Leaving would be even later. I called this the A-B-O-U-T stage. A bunch of unhappy travelers (ABOUT).

Later everyone was given the option of taking the slow boat. Of course everyone agreed to the slow boat. After a 4 hour ordeal and 2 hour boat ride we finally arrived on Koh Rong.

Looking at the crowd on the boat ride,  this island is geared towards younger twenty somethings. Walking off the pier I realized why. Koh Rong is full of bars and budget places. It seemed like every guest house has low rates , cheap food and a resident dog. Most of the young travelers carried large backpacks looking for the most budget place to stay. Some of the guest houses offered shared rooms or private rooms. At my age, sharing a room with a stranger is out of the question.

Flash packing,  we stayed at Paradise Bungalows. This is the nicest place on the island.  A 15 minute ferry ride to the exclusive Song Saa Resort is the highest end property close to Koh Rong. Rooms start at a whopping $1,800.00 (USD) a night. Paradise Bungalows is located at the end of the beach stretch from all of the loud bars and budget places. At $100.00 (USD) a night my expectations were a little higher. The bungalow was “sealed” with air conditioning, closest to the beach and recently added to the property. That’s where all the good news ended. Upon arrival we were told there is no electricity in the rooms from 6am-6pm, the internet is down indefinitely and no hot water at any time. Instructions were given not to put food of any kind outside or inside the rooms. Wild monkeys will come and enter the rooms to get food. They explained “it’s a frightening experience”.  The word frightening was enough said for me to finally follow the rules.

The room was made of stone with only a bed inside leaving only enough room on each side to get in and out of the bed. The bathroom was outdoors along with the shower. When the electricity kicked on the lighting was very dim. But the air conditioner was a big relief. The only light in the bathroom was next to the toilet leaving everything else in the dark.  On a high note, the food in the restaurant was really good. We never left the property to eat out. Since this is a backpacker’s heaven, the food on Koh Rong isn’t anything special. If this is as good as it gets, I can’t imagine what a $15.00 (USD) room looks like.

At this point my own advice about traveling kicked in.  NEVER make a decision on a place until you spend the night and wake up the next day. So far I wasn’t a big fan of Koh Rong. Especially after dropping my electric toothbrush then seeing the bottom fall into a open drainage hole in the bathroom floor. I just kept telling myself “the budget backpackers would love a sealed room and air conditioning”.  This made me feel a little more grateful during the night. But I was ready to leave before the electricity turned on.

The beach was nice but the sand ratio to the ocean was slim. The water is clear and warm. Most of the sand to sit on is moist not dry. The landscaping is lots of trees and jungle. The only built up part of the island is along the shore. The rest of the island is jungle. There is a trail through the island to the other side. Its rough terrain and an hour or so hike. The tv show Survivor was currently being filmed inland but no where close to this area.

During dinner the first night, a waitress dropped a tray of dishes and screamed. Immediately we looked to see what it was. A gecko about 9 inches long  and 3 inches wide had a 4 inch long green grasshopper in its mouth on the floor. It was larger than geckos sold in most pet stores. Everyone had there iPhones out flashing right in the gecko’s eyes (including me).  The waitress was a local so we were all surprised she was so scared to see this.  Waiting by the light outside our room were a couple of geckos that same size. The manager told us it was unusual to see them on the floor and not up high.  I’m a fan of lizards so it wasn’t as scary but he was big.

A black dog came running full speed towards our bungalow the next day. He stopped short at the window and kept looking in. Almost like he was called over from something inside the room. He wouldn’t budge from staring inside. We were sitting outside wondering what he saw in there. I opened the door to let him in. He walked in the room and refused to come back outside. He passed on food, water and a pillow. It took a lot of coaxing to get him to come out. He spent the entire day with us on the patio waiting to get back in. I tried to explain to him there was no electricity and thats why we were outside to. 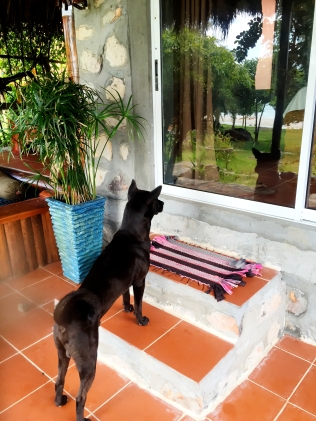 Feral angel wanting to get in -Koh Rong Cambodia 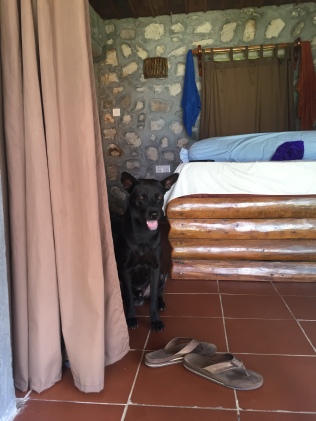 After spending the first night on Koh Rong, I think its safe to say it’s not one of my favorite places. However, this is the closest I’ve come to actually roughing it. No electricity or hot water is not my idea of a $100.00 room. Thank God it didn’t rain during the day. Two ladies giving massages were set up on the beach in front of our room. Both of us got a one hour massage at $10.00 (USD) by the sea. That was a highlight.

The Paradise Bungalows are run by a German man who is continually bashed on TripAdvisor. I found him to be polite unlike the negative reviews. He sits in the restaurant all day watching over everything. On occasion he openly had a joint in his mouth or hand. He is surrounded by his staff and his two big German shepherds. The dogs do whatever he says on command. At times the dogs would come over and give wet kisses with fish breath before being commanded away. He told me he breeds German shepherds and has two more at his other property on Koh Rong Samloem.

The owner is fed up with the drunkard backpackers using Koh Rong as a place to party. He said it doesn’t stand for what Cambodia really is and I agree. He doesn’t mind the marijuana use but told us the methamphetamine drug has been a big problem. He decided to donate land on his property for a police station to be built next door. He said he had an agreement with the police . They would allow him to smoke pot and not bother him. This was being built during the time we were there.

During a walk down the beach I saw a guy getting his hair cut on the beach with the hair going onto the sand. During breakfast three hung over guys came in and fell asleep laying down on at the table. When we returned for lunch they were still there sleeping.  Things like this can ruin nice places. 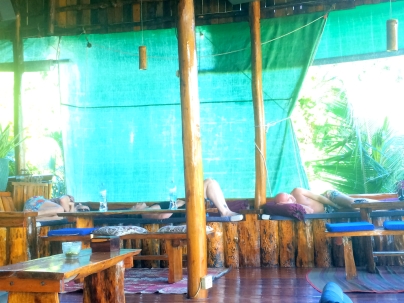 Hung over guys sleeping in restaurant 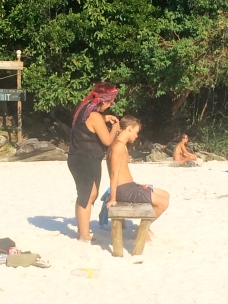 His employee Bora was one of our favorites. He looked like a small child but he was 15. He went to school in the morning and worked as a waiter in the restaurant at night. Some of the reviews on TripAdvisor mentioned Bora. People were accusing the owner of using child labor. In one of the reviews the owner responded that Bora was 14 (at the time of the review) and was left behind by his mother a year ago. The owner took him in and takes care of his school, job and medical care. Doug gave Bora his old iPhone as a present for being awesome. He was thrilled to have it which made us smile.

I witnessed open drug use on a couple of occasions. Spending $100.00 a night on a room without hot water and no electricity during the day made me question what the prisons would be like. Why would anyone risk illegal drug use with the possibility of going to jail in a foreign country? Even if everyone else is doing it, there is always a risk. Even though police aren’t present on the island, bribery and set ups are still something to worry about. Americans are like walking dollar signs in some places.  Is it really worth it?

If I was still drinking and 10 years younger this island may have been more entertaining. Outside of drinking alcohol there isn’t much to do at night. Unless sitting at a bar sipping fruit shakes with people half your age is entertaining nightlife to you. At the age I am now, I’m more interested in the cultures of places and respecting them. The reason I like coming to far away lands is to see and do something different. Koh Rong is lacking the things I love most about Cambodia. The beach was nice but the accommodations and comfort level left me wanting to leave the island. However, the lesson learned from this experience is sometimes the most uncomfortable situations can be the most memorable. Also it taught me to be grateful for the things I have and what I’m used to. It can always be worse.