Bangkok has really changed over the years. It went from third world to metropolitan. The city is huge and filled with buildings, condos, upscale shopping centers, sky trains, international chef run restaurants and fine dining establishments. 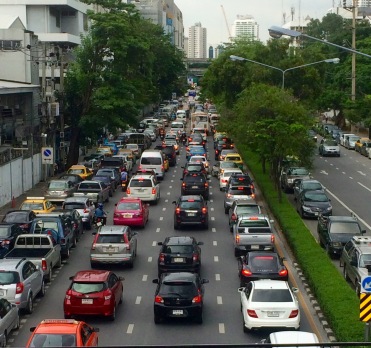 Coming from the madness of Khao San Road in the Banglampu District, moving to the inner city was a relief. Being in the city made me realize how far behind America really is. The malls superseded the nicest malls in the United States. Each store had a unique design unlike anything I’ve seen. 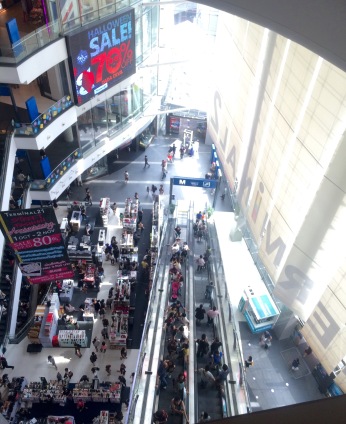 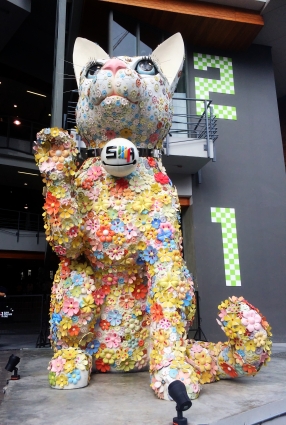 Flowered cat outside of Terminal 21 Mall

The food courts at all of the malls were modern and filled with made to order international culinary dishes from around the world. Hopefully America will one day follow suit. The food courts we visited were Siam Center (Republic Food Court), Terminal 21 (Pier 21), Central Chidlom (Food Loft), Central Food Hall, Siam Paragon Food Court, Emporium Food Court.

The prices were high in Bangkok, I didn’t see anyone buying things in the stores but the food courts were packed with people eating. Starbucks are everywhere and the prices are the same as in the United States. Other coffee shops charged less and in some cases the coffee was better. But now and again I found myself in Starbucks for coffee.

In between all of the modern malls and buildings there were the cultural temples. We went back to Wat Pho to visit the largest reclining Buddha in Thailand. Wat Pho had areas filled with gold Buddhas facing in all directions. The entire complex is sacred. Shoes must be removed before entering the temples. With that being said, shoes have been stolen often so now they supply a bag to put your shoes in to carry. 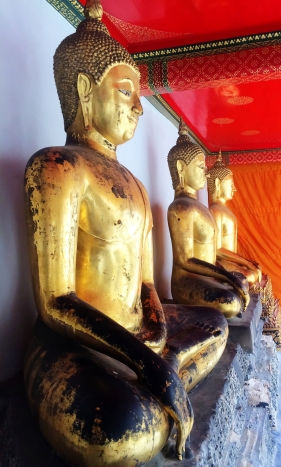 Ko Kret is a small island off the Chao Phraya River. Getting there is by boat only. First thing we did after arriving on the pier is rented bikes. On Saturdays there is a  weekend market. It just so happened to be Saturday the day we went. If you don’t rent bikes, it’s a  2 1/2 hour walk around the island.  It was hot and 100% humidity. Doug did some dealing at the pier and got a private boat direct to Ko Kret for less than $10.  Otherwise it would’ve been a 45 minute boat ride on the public transportation boat. There aren’t very many tourist on this island. We saw mostly Thais taking a weekend day trip out of the city. We stopped at a place that served coffee and coconut pudding dessert. One guy was making fresh coffee and another lady was making the coconut pudding. Not very much English was spoken or understood here. We did lots of pointing for the things we wanted to buy. 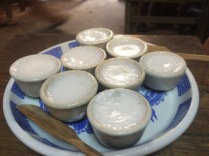 Chinatown is located in one of the oldest areas of Bangkok.  The streets are full of food vendors, dried herbs, hand bags, hair accessories, 24k gold, plastic toys, stationary and souvenirs. Besides the gold being sold, there was nothing of real quality there. I couldn’t stomach trying the food sold on the streets. Shark fin soup was sold everywhere. A small bowl starts out at $28.00 (USD).  I was told it’s very gelatinous. Shark fin is illegal and banned in most states in America. It was strange and sad seeing it openly being sold here. Sharks are killed just for their fins. It’s called “shark finning“. The fins are taken and the rest of the shark is discarded in the ocean. I just can’t support something like that on any level. 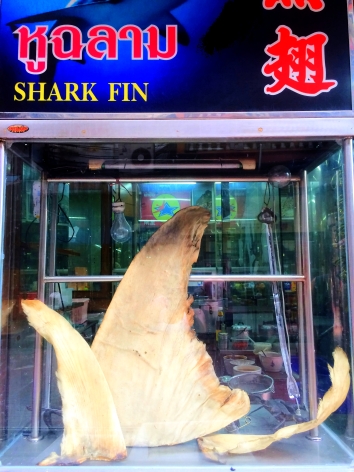 Bangkok Flower Market (Pak Klong Talad) is the largest wholesale flower market in Bangkok. It is open 24 hours. Boat and trucks deliver flowers daily from different provinces in Thailand. Most of the flowers were cut at the base of the stems and styled by hand into decorative arrangements. There were so many flowers I couldn’t help but wonder how many of them are wasted each day. Most of the arrangements were made for temple offerings but there were also special occasion arrangements. Local vendors and store owners arrive early in the morning to stock up for the day.  Women and men were along the sidewalks with individual flower stands selling them as they were working by hand making more to add to their sales collection. The artistic talents of these florist were amazing. Banana flowers, roses, orchids, lilies, tulips, snapdragons,  jasmine and tons of marigold blossoms were ones I saw and knew by name. There were many others I couldn’t even name.

Thailand‘s Little India, is next to Chinatown. I didn’t notice many natives of India there. Most of the vendors were selling fabrics and textiles. It was very close quarters walking through the wholesale shops in the alleyways. 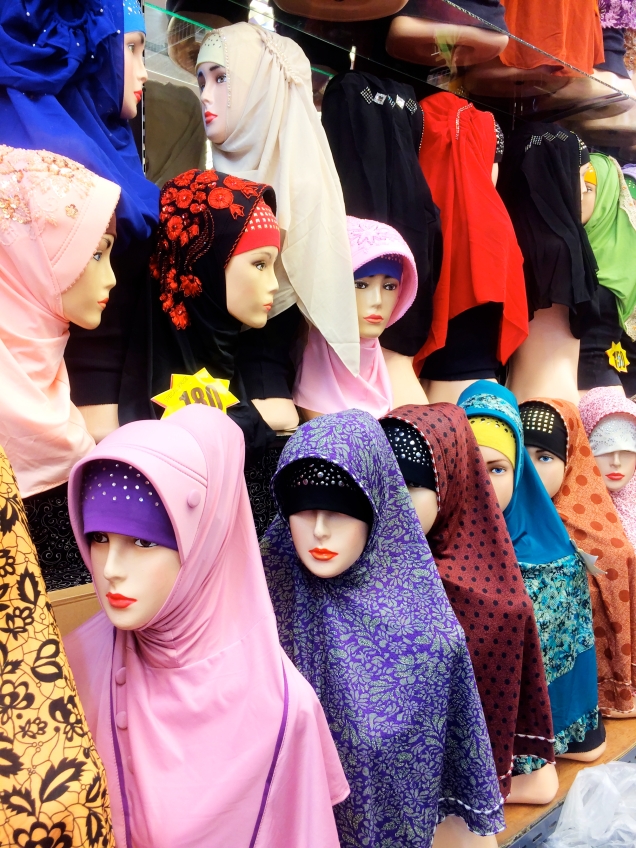 This visit to Bangkok wouldn’t be complete if I didn’t mention horse racing. The Royal Sports Club has thoroughbred horse racing one Sunday a month. Just so happened to be on the Sunday we were there. There is a golf course in the middle of the racing track. Being here was a far cry from all of the tracks in America. Let’s just say it wasn’t a place where the patrons dress up, sip on champagne and watch from a beautiful clubhouse.  This was like nothing I’ve ever seen. I was probably one of the 5 women there watching. Even the horses had it bad. Everything was filthy and nothing was comfortable. As much as I love the track, I didn’t like it here at all. We left after 2 races.

Horse Paddock at the track 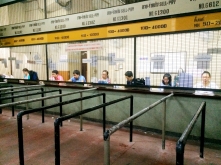 We visited two areas that are specifically geared for prostitution. When I first visited Thailand many years ago I was intrigued by this. But after awhile I became somewhat disgusted with it. The first was Patpong Road. There is a huge night market selling all knock off clothing, jewelry, electronics and souvenirs mixed in with a strip of prostitution bars and sex shows. The second area visited was Soi Cowboy. This street is filled with prostitution bars on both sides. Girls are also outside of the bars touting men to come in.

There is a stage with girls young, old and all sizes dancing off beat to music. Attached to their bikinis are numbers. Men pick out the number they desire. A ticket is written out and the girl is yours for “long term” or “short term”. I tried to get photos but they are very strict about cameras around those areas. (See: https://en.wikipedia.org/wiki/Prostitution_in_Thailand)

There was a sign at our hotel on Khao San Road stating no friends were allowed upstairs without an additional charge.  At first I thought they were talking about backpackers trying to get as many people in the room to sleep without paying for it. But they were talking about hookers!  I thought it was funny until one of the staff pointed to the sign as I was walking to the room with Doug one evening. I was escorted to the front desk to show my passport and reconfirm I was a guest and not a hooker. Once the misunderstanding was cleared up, the  security guard gave me a friendly Thai smile and said “so sorry”. We laughed about it in the room but I was pissed during the whole ordeal. I was wearing exercise clothing for God’s sake.

Overall, Bangkok was an awesome city. It was like being in New York. Lots of unique things around every corner. EVERYONE was on their smart phones EVERYWHERE. I kept wishing that Steve Jobs was here to see the little monster he created all around the world. Even though Bangkok is hot and humid, they know how to blast the air conditioning indoors. At times it was comical how cold it was but always welcomed. So far this was the most expensive city on our flashpacking adventure.