Khao San Road deserves it’s own post. This street is filled with anything your heart and head can imagine. I’m serious. I thought I had seen it all. During the day it’s crazy but at night it’s bizarre and crazy.

“One night in Bangkok makes a hard man humble”. Remember that song? It’s really true. I thought it was the craziest I’d seen the last time I was here.  Crazy is now new and improved.  Anything you could possibly imagine is here. Khao San Road is crazy in the day, but at night it’s even more maddening.  From laughing gas to fried spiders! It’s all here and it’s all affordable!

There was so much visual overload I had to put my camera down to take it all in. Have you ever seen over 30 people getting their feet massaged at once outside? Massive foot massages broke out after dark. Every body is getting their feet rubbed. It was like a massage brothel.

Have you ever been offered laughing gas on the street? Would you like a full head of dreadlocks in less than 2 hours? All of these things are possible and being done nightly here. Most of the crowd are foreigners and the only Thai people in sight are the ones working. They have found a way to condense fun, sin, debauchery and food in one place.

Does Hollister know about this? 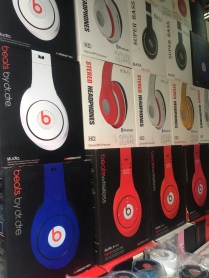 Does Beats know about this?

Does Nike know about this? 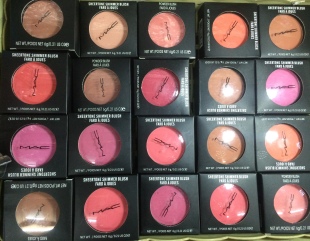 Does MAC know about this?

Does Calvin Klein know about this?

I was thinking about buying a degree from UCLA. Still might.

Most people are drinking and people watching. Restaurants set up tables on the sidewalk nightly so diners can see and be part of the mayhem. Most of the restaurants on Khao San Road are geared for budget travelers. The problem goes back to the old saying “you get what you pay for”. I’m very picky and even more so when it comes to cleanliness and sanitary standards. I’ve seen some things that make me question the cleanliness and sanitary standards on Khao San Road. It could be my mind messing with me but I’m not willing to take that chance. 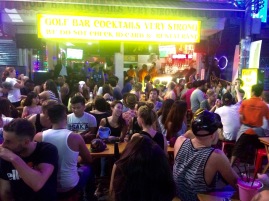 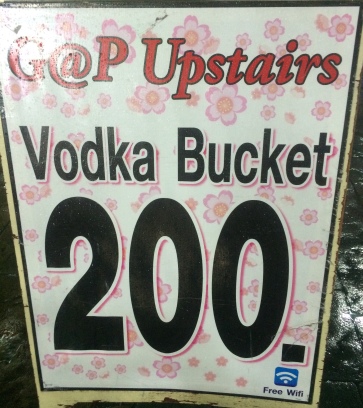 Some of the food stands have legitimate food like noodles, fresh fruits and juices. 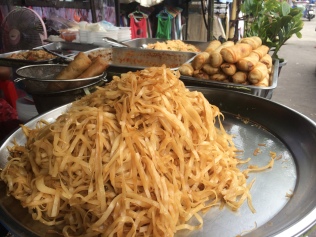 Then there are those that sell insects and spiders. I’ve witnessed a few drunk tourist trying the  mealworms and grasshoppers.  Being a fan of mostly anything fried, I personally wouldn’t chew on any of this. 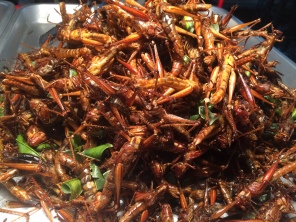 Like all parties, it’s all fun and games until somebody gets hurt. As we were going back for the evening an ambulance was called. A girl from England took something offered on the street and was laid out. Looks like her budget night just got really expensive. We all watched as an ambulance navigated it’s way through the crowded streets.  It was a tight squeeze.