After a high speed ride on the Shinkansen from Tokyo, we arrived in Kyoto .  What normally takes six hours in a car only took two on the train.

Japan has always been ahead of everyone when it comes to train transportation. The Shinkansen is a high speed bullet train that runs throughout Japan. Shinkansen train lines are over 1,700 miles and travel at speeds from 140-200 mph. During peak times, there are thirteen trains per hour in each direction with sixteen cars each! Just as fast as the train arrives, it’s gone.

Kyoto is home to Japan’s geisha. A geisha is called a geiko (pronounced “gay-ko”) if she is from Kyoto. Kyoto is where the highest trained geishas are from. There are about 100 geiko and 100 maiko in Kyoto. Other cities, like Tokyo, have some version of geisha, but they don’t usually undergo the strict training that defines Kyoto’s standards. The girls start training around 15 years old and must be completely dedicated to the training process. They are watched after a mama-san (Woman of the house) in a house especially for them during their apprenticeship.

After five years of extensive training in arts, musical instruments and dance [maiko] graduate to geishas.  The cost of this process can be as high as $500,00.00 (USD). The maiko (geisha apprentice) and geisha dress in different styles.  Their hairpins can cost as much as $1500.00 (USD) each!

I started reading about geishas and their mysterious world. The best way to spot them here is in the Gion area around dusk when they are leaving for work. I read that some people plant themselves outside their door waiting to get a picture of them leaving. If I knew the house I would probably be doing the same thing but I know (from the things I’ve read), this really annoys them.

Higashiyama District is one of the most preserved areas of old Kyoto, starting on Ninenkawa Street. This street is frozen in time from the early days in Japan. The area is also recognized by UNESCO (rightfully so).  Everything is preserved, clean and in pristine condition. The streets are narrow and still open to traffic. Seeing women dressed in kimonos walking around town is really pretty. Most of these are tourists who have rented the kimonos for the day but it still adds to the magic of the area. Stores line the streets with stores selling traditional Japanese gifts, lots of matcha deserts and teas,  hands on pottery studios, galleries and restaurants.

Matcha is the star ingredient in the dessert places along the street. Green tea ice cream wrapped in gold leaf paper was my favorite. I didn’t want to shell out the $10.00 (USD) for a cone but it sure was pretty.  Kyoto is also known for their matcha face mask. The mask is made from authentic matcha made in Kyoto with other fruit and herbal extracts. Thinking this would help my skin look as flawless as the Japanese ladies I’ve seen I gave it a try but nothing substantial happened to my skin afterwards. Oh well. 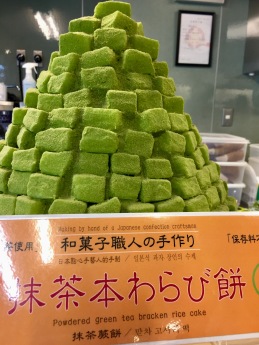 Another specialty of Kyoto is Yatsuhashi. Yatsuhashi looks and feels like a raw wonton. They are made with  glutinous rice flour, sugar and cinnamon then formed in a triangle. The insides vary from mashed sweetened red beans to sweet potatoes. They taste mostly like sugar and cinnamon.

A long dim hallway leads you to private rooms where guest can sit on the floor and enjoy their drinks. The home is two stories with the second story hosting a more traditional sitting area mixed within a few tatami rooms. It was one of the coolest Starbucks I’ve ever been to and I’ve visited Starbucks in every place we have traveled.

Iwatayama Monkey Park is on Mt Arashiyama and home to 150 Macaque monkeys. Macaque monkeys are also known as Japanese snow monkeys  and the ones in the park are divided into groups of 30-40 per family.  These are the same monkeys that enjoy the hot springs during the winter with really red faces.  They are the only primate that can live in extreme snow conditions several months a year. Each monkey in this area has a name and recorded history.

Seeing these magnificent wild creatures was a highlight of visiting Kyoto. After paying less than $5.00 (USD), we ascended up a moderately steep mountain to an area that is roped off. This area is where the monkeys and humans can interact.

Employees of the park feed them chestnuts, sweet potatoes and seeds to keep them around. The monkeys were walking around, playing and searching for leftover seeds ignoring the many people snapping photos of them. The rules for visiting the area were no exposed food, no squatting to take their picture and no close ups with smart phones. 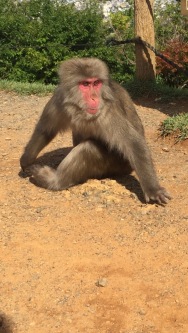 An indoor caged rest area is open for tourists to go inside and feed the monkeys. Outside the windows are screens the monkeys climb on with enough space for their arms to reach in and grab the treats. For $1.00 (USD) you can chose sliced apples or peanuts to feed them through the screens. I bought five bags. Just seeing their red faces and little bodies was exciting.

There were new babies holding onto the adults and riding on their backs. Occasionally a small fight would break out but it ended as soon as it started. It was easy to tell the grown adults from the younger teens because their faces actually looked aged with time. One of the rules I forgot to mention was not to look them in the eye. Once inside the caged area Doug and I did this often and got really funny results. They hate seeing teeth when we smiled at them and would end up showing their teeth in an aggressive manner. It’s really funny from indoors, but I would never try it outside that building.

Kiyomizu-dera is a Buddhist temple and UNESCO World Heritage site. Kiyomizu-dera means pure water temple. There are waterfalls behind the temple. The temple is high on the hill overlooking the entire city.

The Blue Dragon festival was being held at Kiyomizu-dera that week. This festival is held only five days each year.

The Blue Dragon festival’s meaning is to honor Seiryū, (a divine god-beasts ) whom guards Kyoto’s borders against encroaching misfortune and disaster.  Men and women dressed up as soldiers, priests, and other members involving the mythical story paraded through the streets starting from the temple.

Yasaka Kōshin-dō temple looked like a big colorful toy from a distance. Once I got closer I realized the colors were stuffed blessing balls tied to the walls of the small temple. The balls are called kukurizaru and represent “the control of the playful and desire-driven creature everyone has inside his body”. To have a wish granted, you must sacrifice one desire. This is done by writing your desire inside one of the color balls and tying it to the temple to make that desire vanish. What makes this temple unique is it represents the Koshin faith. Koshin is a folk religion that is based on Chinese Taoism and Buddhism.

Kennin-ji temple is one of the “five most important Zen temples of Kyoto”. It’s also the oldest temple in Kyoto. The Zen garden is so peaceful and beautiful.  Inside the temple are painting by famous artist in Japan.

Pontocho  is a narrow alley in Kyoto packed with restaurants on both sides. Most of the restaurants along the eastern side of the alley overlook Kamogawa River. People sit on the restaurant patios and look at the river while dining. The prices range from inexpensive to over the top expensive.

I’m finding out that the grocery store prepared foods have tasted just as good as the restaurants and cost half the price. This has been a saving grace for dinner.  All we need is a microwave and a frying pan to achieve the ultimate dining experience. Instead of eating out for dinner, we ate at home every night. Right next-door was the most amazing grocery store in all my travels. Everyday fresh foods are prepared and sold. The meat section featured premium wagyu and Kobe beef. With a frying pan and a tiny bit of oil we had our own yakiniku (Japanese grilled meat).

There are so many temples to cover we didn’t even scratch the surface. Kyoto is a pristine, quiet, organized, peaceful city I’m really sad to leave.  Kyoto turned out to be one of favorite memories of Japan so far. Next stop on this fast train journey is the city of Osaka.