Landing into Brisbane is like landing into the land of sunshine and smiles.  After a rigorous airport security check in process at the airport in Israel,  followed by a 24 hour flight with two short layovers, it was a relief to finally get here.

Australia is divided into six states (Northern, Southern, Western, Victoria, New South Wales and Queensland) and ten federal territories. The state of Tasmania is an island in close proximity to the mainland. Brisbane is where our three-month tour of Australia begins.

The first day in Brisbane we decided to relax in a nearby park. South Bank Parklands is a park mixed with rainforest, water, grassed areas, restaurants, shops and fountains.  This is a place for locals and tourist alike to enjoy, relax and explore without spending a lot of money. There are even complimentary grills to cook on if you chose to spend the day at the park.

The Nepal Peace Pagoda in South Bank Parklands is open to the public as a place to meditate and visit. The Pagoda is one of only three Nepal Peace Pagodas outside of Nepal. It was crafted by 160 families as the Kingdom of Nepal’s contribution to World Expo 88 [Expo 88].  The entire pagoda was moved to the park in 1992.

Streets Beach is a man-made beach with kid’s swimming area in the center of the park. This beach is open for anyone to swim and spend the day.  Restaurants and pubs from gourmet to casual are close by in the park to have lunch. I’ve never seen anything so clean, organized and trouble-free in a public area. The park is along the bank of the Brisbane River. The City Hopper (river ferry)  travels along the Brisbane River as a free service stopping along the way in different areas of Brisbane.

The Wheel of Brisbane is a big attraction at South Bank Park. The admission price is $15.00 (USD) to ride in an air-conditioned capsule and get a 360 view of Brisbane from 200 feet above ground.  This wheel is a big part of the Brisbane river skyline.

We rode the  water taxi the entire route to see the city from the water. Apartments lined the shores and each stop was in a different neighborhood along the bay.  Real estate on the waterfront in Brisbane is high and the apartments are beautiful. The City Hopper travels under huge bridges over the water and the ferry stations are updated and spotlessly clean.

Brisbane is full of skyscrapers, hipster restaurants, shopping, museums, public transportation systems and a body of water. Things seem organized and clean in Brisbane. It’s a taste of what utopia must be like. People seem to be more relaxed and in tune with their surroundings. There isn’t that underlying stress in the air that I find in America.  Again, here is a country that puts the money into their infrastructure and takes care of the landscaping in public areas. Everything is new and updated including the roads, buses, bridges, sidewalks, bike paths,  beaches and buildings.

Nimbon is a town one hour from Byron Bay.  We were told this was a very trippy place to see in Australia. After driving through farmland for 45 minutes we started to see signs to Nimbin. This town is literally in the hinterland. The first thing we noticed was the street had artistic designs drawn on them from chalk as if someone was doodling.

NImbin in only one street, at least the heart of town is. This street is filled with hippies, hemp and a few cafes. Everything here was odd. It was like landing in Alice and Wonderland. Elderly people were walking around with long dreadlocks and rainbow pants.

The vibe seemed to be herbs and I’m talking about the natural kind. Lots of incense and literature around about legalizing pot in most of the stores.  This is also home of the yearly MardiGrass festival. The MardiGrass festival is a cannabis law reform rally and festival. 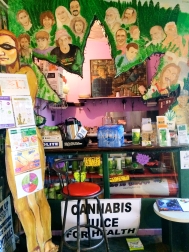 Bumper stickers, hemp clothing,  candles, ponchos, festival blankets and hippie clothing were sold everywhere on this street.  We would walk by people and hear them say to us softly “what you looking for?”.

After eating the worst fish and chips of our trip at the Sunshine Cafe we walked around, got the jest of the town,  got back into the car and left.

Brisbane is a beautiful developing city, I wish we stayed longer to really dive into the city’s museums and shops. Hopefully, we will return to spend more time here.