Dala is located on the Yangon River across from downtown Yangon, Burma. The town has twenty-nine villages. Dala is undeveloped and very rural because there isn’t a bridge to connect Dala to Yangon.

The only way to get to Dala is by ferry. The ferry boat leaves every 20 minutes and can accommodate over 100 people. The boat ride is less than 10 minutes from pier to pier. The river water is completely brown. There is so much action during the ride. Vendors are  selling anything you can imagine. Fresh fruit, children’s dresses, quail eggs, betel nut chew and puffed snacks are just a few things sold.

Selling eggs on the ferry 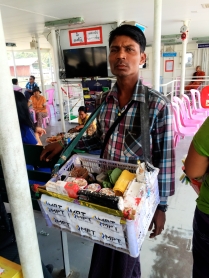 Selling betel nut on the ferry

Selling pineapple on the ferry

It was so fun just watching everything going on. Everyone is yelling what they are selling, while people are throwing puffed snacks off the side of the ferry to the birds the whole ride. Of course I bought some of those snacks and threw them overboard to the birds.

The most common and effective way to see the town of Dala is to hire a rickshaw (a bike that has a two seat attachment added on) driver to take you around. One person sits facing the front and the other seat is behind facing the back while the driver is peddling the bicycle. As soon as we got off the boat we were approached by the drivers. We hired a guy named Sankee. He was persistent from the time we got off the ferry and spoke English well. Sankee quoted us a price for a half hour tour which ended almost 3 hours later.  The tour included three major stops: Shwe Sayan Pagoda, Fisherman’s Village and Bamboo Village.  Little did we know the stopping and chatting with locals and Sankee’s explanations of the stops were extra time added to the tour which meant extra cash in his pocket.

Sankee has lived in Dala for many years, he was 34 years old and has a wife and three kids. His wife is 13 years older than him and suffering from stomach cancer. He told me she used to be “very fat” but now she is “very small” from the cancer. They don’t have money for medical care so he is prepared to raise the 3 children on his own (only one is his biological child). Despite his troubles, he had an uplifting happy spirit and outlook on life. He also told me he borrowed 300,000 kyat ($244.00 USD) to pay for his wife’s cancer treatments and is worried about paying that back each month.

It wasn’t until I got back to the hotel and researched Dala that I read about other traveler’s experiences with sad stories by the tour drivers.  They are known to tell foreigners of sicknesses, debt and hard times to gain sympathy which equals cash. This made me question all of Sankee’s stories. On one hand I wanted to believe him, but my gut was sending my brain red flags.  That’s when Oprah Winfrey came to mind. I remember a show where she told everyone to always trust your gut feeling inside, it starts off as a tapping and ends as a pounding when something isn’t right. I remember feeling a faint tapping during the third misfortune story.

Shwe Sayan Pagoda is in the center of town. The pagoda was under renovation so we didn’t get to see the gold in all its glory. Sankee said it would be ready in another 3 weeks.

The interesting part about this pagoda is in the center area lays a mummified monk enclosed in glass protected by a locked gate. The monk lived in Dala before he died.  He was put in the pagoda 150 years ago. His body is wrapped as a mummy and covered with gold. This monk is a landmark in Dala. One of his eyes opened in the year of 2008. The villagers took this as a warning sign from the monk of the cyclone that destroyed the entire town later that same year. Above the glass case he is enclosed in, is a picture showing his eye open that year.  It really looked like it was open through the gold cover.

Cyclone Nargis was the worst natural disaster in the recorded history of Burma. The storm hit the ground in early May 2008 at 9:30pm. Since Dala is surrounded by water the cyclone killed thousands and destroyed everything. The sad thing about this tragedy is the entire city of Dala was ignored and overlooked for aid or relief. Obama sent aid to Burma but cyclone victims never received any of it. People died of starvation and disease days after the cyclone hit because of this. The government was run by the military and they refused to let outside help in the country including aid workers, Red Cross, or  their own people from other areas. Instead the care packages, money and aid was kept by the military government. Hearing this from the locals (then checking it out in detail myself) really bothered me. America had sent the most money and aid to Burma ($195 million dollars) and the people never received any of it. China sent the second highest amount of  relief aid to Burma ($10 million dollars).

Bamboo Village is a village that was initially built as temporary housing for the victims of cyclone Nargis in 2008. The name came from the huts made of bamboo with no plumbing or running water. They were really built for temporary shelter and that’s it. All of the people currently living there lost their livelihood, jobs and families because of the cyclone. Today it’s a poverty-stricken area with families and over eighty children still residing there since the cyclone. Seeing this in real life and up close really changed me at that moment.

The children had big smiles on their faces welcoming us to their area with hugs, high fives and smiles. They had no shoes, torn clothes, dirty faces and in many cases no food.

My heart immediately broke. I just hugged and kissed as many as I could.  My head was spinning in different directions on how to help. How can I get food here now? What can I do to be helpful – right now?

None of the children went to school or left the village to interact with other children.  The didn’t have toys, instead I saw them playing with trash (ie. boxes, water bottles, sticks, etc).

There were two large pigs in a small cage and some of the children were playing with them. I didn’t fully understand the reason about the pigs being there. It had something to do with renting them to farm? Even the pigs looked like they were on hard times.

During raining season the mosquitos are a big problem in Bamboo Village because of the standing water. Malaria becomes a problem even causing death in some cases.  During the tour of Bamboo Village, Sankee pointed out a small paved road subsidized by a local non-profit organization after the storm.  The French subsidized an incinerator for bodies to be cremated.

There was a cemetery behind the incinerator. He explained that the “rich people” are buried while the poor are cremated. He didn’t understand why “rich people” would want to bury their teeth, bones and hair. I kind of agree with him. Cremation is a major aspect of Buddhism, they believe it allows the soul to quit the body. Most of the graves were dated within the past 8 years.

I asked Sankee what I could do to help.  He said if we wanted to help, we could buy them rice. He was adamant about not giving them money directly. He said it would create an environment where they would expect that from all tourists and start begging to all the visitors. I understood that.

The local rice farmer was across the bridge and they are the supplier to everyone in town for rice.  The farmer’s wife has a tally for the people in Bamboo Village on who has paid and who has no money that week, etc. Immediately after the tour we went and bought a pallet of rice for the families. My only wish was that I could bring it directly to them instead of leaving it up to the farmer. Trusting it would get to the sources was low after hearing all of Sankee’s hardships. I had to just tell myself, at least I did the right thing, whatever happens from here is out of my control.

Fisherman’s Village was an area where boats were docked, repaired and stored. Everyday the fisherman use these boats and bring back fish to sell.

There are no hotels and very little restaurant choices in Dala. Because there isn’t a bridge connecting Yangon to Dala, growth of the town is inhibited. Sankee showed us a pond that locals use to bath, do laundry and drink from. The water was brown. He said it’s okay for him to drink from it but we would get terribly sick. There was a separate pond reserved for the monks to use, their water looked a little better but not by much. 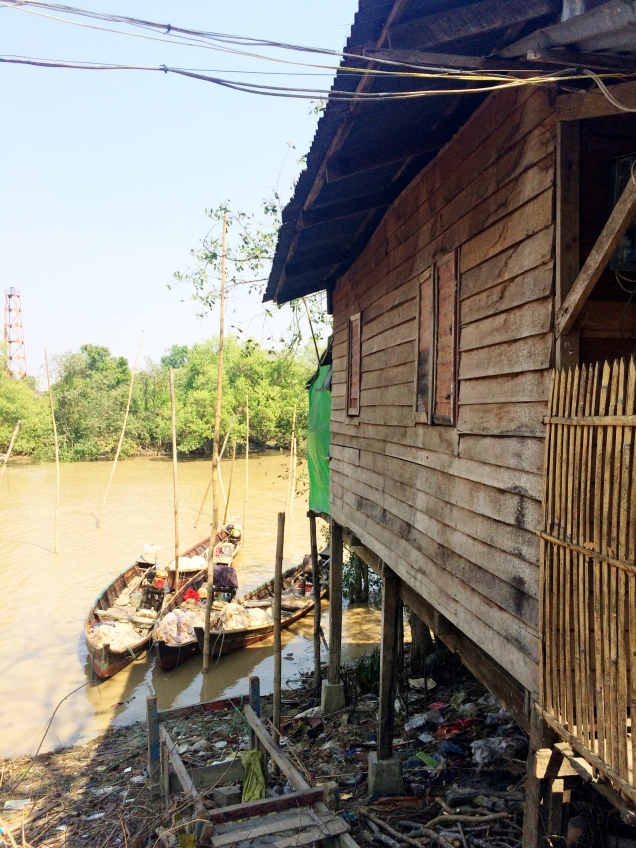 This city really opened my eyes to what is really important in life. I have never seen poverty that up close and personal. I got to see with my own eyes the hardships human beings can survive and what little humans can survive on. When I went to sleep in the hotel that night, I thanked God for all life I had. I thought about all the children that would be sleeping without food, running water, electricity or proper shelter that night.  I also thought about their big smiles and welcomes. I wondered how their spirits could be so high in such dire circumstances. Maybe because that’s all they know and it’s not as bad to them as it was to me? Whatever the reason, this trip made me even more grateful for everything I have.