Inle Lake is one of the largest freshwater lakes in Myanmar. This lake is the home of over twenty species of snails and nine species of fish found nowhere else in the world. The people of Inle Lake are called Intha.  Inle Lake is divided by four cities, each city is a village. Most of the Intha people are Buddhist and live in homes built on stilts in the water.

Nyaung Shwe is the township of Inle Lake. This is where we stayed. This was my favorite city so far. Local life at it’s finest. The weather is surprisingly very cool here. Technology hasn’t really hit Nyaung Shwe, so the local life was like opening a National Geographic. Being far from all the technology makes a place extra special in my mind.

The lnle lake boat ride tour was my favorite part of the trip. Hiring a long tail boat is the only way to see it.

For $14.00 (USD) we hired a driver for the day. His name was Ou Ou (pronounced  “you-you” without the “y”). It was recommended we start at 7am to avoid all of the tourists traffic. It was very cold at that hour. The locals dress like there’s a snowstorm coming soon. Thankfully the boat has blankets to wrap up in.

Inle lake is vast with many inlets leading to small villages. These villages are built on the water. The villages are known as stilted villages. Some of the local villagers specialize in crafts. Fabric weaving, goldsmiths, silversmiths and boat craftsmen reside here and sell their products to vendors, tourist and each other.

The “long neck ladies” were the best part of the Inle Lake tour. They aren’t native to Inle Lake. They are part of the Kayan Lahwi tribe.  They come down from the eastern part of Burma for the week so tourists can see and meet them. They were sitting on a bench in a shop waiting for tourists to take their photo.

At 8 years old they start off wearing the neck rings. The ladies we met each had 18 pounds of brass around their necks. I could hardly hold the display in one hand let alone around my neck. One of the ladies had 9 pounds of brass on each leg. Not to mention the bands she hand around her wrist and upper arm.

The rings do not actually stretch the women’s necks. The weight of the brass pushes down on the collarbone and compresses the rib cage making their necks appear longer. They sleep with the brass on and never take it off.  The coil is wound by hand and this process can take many hours. The new generation of the tribe doesn’t have to put the brass on their necks, unless they choose to.

The Nampan floating village was awesome to see in the day but I wondered what it would be like at night. The homes are on stilts in the water.

The water isn’t very deep, but deep enough for a boat. The toilet is detached from each house and an outhouse is built behind the home. I wondered where the waste went. I didn’t see a bottom to the outhouses only the stilts. A couple of the houses had satellite dishes attached to the outside.

The Maing Thauk market was packed with people. There was so much dealing going on we were in the way just observing. Everything was for sale there. Gasoline, school supplies, household items, fresh vegetables, dry beans, clothing, cooked food and souvenirs were a few items I remember seeing. My favorite part of the market was seeing the locals. 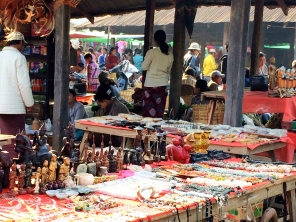 The Shwe War Win silversmith is in the village of Heyar Ywama. A lady that lives there gave us a tour and explained the entire process of making crafts out of silver. It was really fun to see but in the end they led us into their store and the prices were about the same as what I would see in America. Even though the factory was on stilts in the water, they accepted MasterCard as payment for the silver items for sale.   Selective technology.

Intha fisherman use one leg to row the boat with an oar wrapped around the upper leg to hold it. They stand on the very end of the boat and with incredible balance steer the boat and use their free hand to fish.  Seeing them in action was fun. The fisherman slams the oar on the water to attract fish, then lowers the net to catch them. Some fishermen were using nets and some were using cone shaped baskets.

Along the shoreline were a few water buffalo taking a break in the water. I never knew how straight a water buffalo’s teeth are, they are almost perfect.

The Shwe Pyae Shun Hand weaving Center in the village of Inpawkhone was incredible. It’s amazing how these women work all day making fabric. It takes 7 hours to weave one meter of fabric.  We witnessed the laborious task of making fabrics.  A lady was breaking lotus stems in half and removing one strand of fiber from each one. She would roll them together to make one long strand of thread.

After a detailed orientation of the process we ended up in the store where they sell the items.  These are the same scarfs we see at every single vendor stand but after seeing the way they are made I felt obligated to buy from the factory. Too bad they weren’t at factory prices. I paid $10.00 (USD) for a scarf that sells for $3.00 (USD) from a vendor.  The one I really wanted was made of the lotus plant. The process is meticulous and the fabric is much stronger. But the prices started out at $100.00 (USD) and up. I would rather use that money on traveling and seeing things than to have a scarf.

Cheroot Cigarette Factory in Nampan was my favorite stop. These weren’t the cigarettes you are used to seeing in stores, these were “sweet cigars”. About 6 women were rolling the cigars by hand using an unusual combination of honey, tamarind, brown sugar, anise, banana and rice wine wrapped in a fresh cheroot leaf. I smoked one of them and it tasted like black licorice. I don’t like cigars but I really enjoyed these.

I think the biggest letdown was the Jumping Cat monastery. It’s a monastery that has feral cats living on the premises.

Supposedly an abbot at the monastery has trained the cats to jump through a hoop like in a circus.. When we got there I was expecting a show or to see a monk with a hoop. Instead, there were beautiful Buddha statues and a few cats roaming around. Not a monk in sight.  Instead of jumping we did see some cats humping. Capturing that on film was the highlight of the jumping cat monastery. See below.

The village of Indein  has pagodas still standing from the 17th and 18th century.   There were a couple of locals asking every tourist to pay 500 kyat ($.40 USD) if we wanted to take a picture of the pagoda. For some reason this bothered me. I convinced her I just wanted to look at them and not take a picture. That was my honest plan. Once I got to the area I was approached by women from the Pa-O tribe selling scarfs. I loved their tribal wear so I took a picture of them. Technically that’s not breaking the rules.

Once I got over hill and saw the pagodas I realized they were just as beautiful as the ones in Bagan.  Not planning on staying long, I secretly pulled out my iPhone and took a couple of pictures. Low and behold I was approached by a tour guide who asked me if I paid to take the picture. She had overheard me convincing the girl asking for money that I wouldn’t take a picture. Now I’m faced with a serious dilemma. Do I lie on sacred ground about $.40? Do I go back down the hill, find the local and pay them? Do I tell the truth and say no I didn’t pay? Do I erase the picture on my iPhone?  Well, I lied and said I paid, went into a pagoda and asked forgiveness for lying, kept the picture and left out the back side of the pagodas. Not one of my finest hours but I got the shot.

One of the highlights of this visit was getting my pants hemmed. We went to the local market where they sold everything and they even have seamstresses set up to hem clothing. I thought this was going to be a difficult task bringing them in explaining what I needed and then returning before they close to pick my pants up. I spoke to a cute young seamstress who said she could hem them. I measured the pants off in the hotel room and brought them in. Within the thirty seconds she had cut the bottoms off and a minute later did a double stitch hem on a sewing machine for the 1950s.

Within five minutes the pants were done and I was on my way. The total cost was $.54. I gave her a dollar.

Shipping packages to the US was a lot cheaper here then it was in Singapore so I figured I’d send a box home. I bought a Buddha astrology scroll  & an antique Burmese pipe from a vendor during my lake tour that I really loved.  Every vendor sold them. The lady at the post office informed me that I could not send any silver gold home which was not a problem. When I brought the box in already taped up, the first thing she did was take it apart and look inside. She rejected the pipe and held onto the astrology scroll. She said all of my souvenirs were off-limits.  This was confusing because these are souvenirs sold at every market for tourists to take home.

She really zoomed in on the Buddha astrology scroll.  She made a lengthy phone call  with the scroll in her hand. Minutes later I was informed that I couldn’t mail that home either.  In the end my snorkel mask and a beaded tassel necklace I bought in Thailand for $2.00 (USD) was left in the box. She quoted me $33.00 (USD) and I left with the box in hand.

It’s no secret that I love feeding animals of all species. I will go out of my way to do it. While dining at One Owl Grill, the cutest puppy came to the window asking for just a pinch of what I had. I couldn’t resist. After giving a pinch of my pork meatball, he wanted another pinch. After three pinches of meatball I couldn’t get him to stop asking. This caused some attention from the staff. They tried to “scat” him away but he got nasty and snapped at the staff. This caused even more attention. It ended badly. The staff was pissed that I fed him, the puppy was pissed they interrupted his food supply and I was embarrassed I got caught. I just couldn’t resist his face.

While riding bikes through town, school was about to let out. The parents gather around the window of the school while the kids sing songs to them before leaving. It was so cute. After a few songs the kids are let out one by one into their parent’s arms.