The flight to Bagan was over a very dry mountainous area. Once we passed the mountains the landscaping changed into dry flatlands. The airport was dated and small, that’s when I knew this was going to be a great place.  The first thing I noticed was the cool weather. The weather in Bagan is very chilly in the morning and late at night. The one pair of pants I packed, I wore everyday here. The locals wear coats, hats and sweaters in the morning. Rightfully so.  It was a nice change from the hot and humid days and nights we’ve traveled through the past 4 months.

We stayed in a town called Nyaung-U. None of the backroads are paved in Nyaung-U. The main roads are paved but the turn offs are dirt. Occasionally a cattleman with a cow or goat herd crossed the road. Sights like this made me feel really far away from home.

Seeing things like this made me realize how poisoned I’ve become by the news and media. Life is happening all over the world and the news only reports the horrible things that are going on. I’ve lived in fear of going to places far away like Burma solely listening to American media. The people of Burma are lucky they don’t have the fear of the world being pumped into their households through a television set. They live and enjoy life’s simple pleasures.

Bagan is an archeological site filled with temples. The temples were built dating all the way back from the 9th to 13th centuries. There are over 2,000 of them left out of 10,000 and they cover an area of 16 square miles. The temples are different sizes and shapes.

There were so many it was hard to choose which ones to stop at and admire. Also it was very hard to keep up with the names of each temple. Some of them were just numbered on the map. The ones that did have signs, the signs were written in Burmese writing only. There is a Buddha in every temple and pagoda. The well known temples were flooded with vendors, buses and tourists.  I liked visiting the smaller pagodas. The smaller pagodas were harder to get to for large buses and tourists on foot which means the area was very quiet. No matter which temple or pagoda we visited, there was always a salesman around asking us to buy something.  All of the pagodas and temples were beautiful.

While on top of one of the many temples looking out from above, I couldn’t believe just how many temples there were. The entire area is full of temples. There are hundreds and hundreds  of them. All of them have a brick foundation and are intricately detailed. Inside some of them have colorful tiled ceilings and walls. I wondered to myself, what did these people see from the 9th to 13th century that inspired them to cover the land with sacred temples? What did they know that made them build these sacred shrines to show appreciation to this Higher Power? Their houses are made of tin with no stability to the elements of weather or natural occurrences. Why did they use their best resources and materials to build temples that could withstand the test of time and not take care of themselves that way? 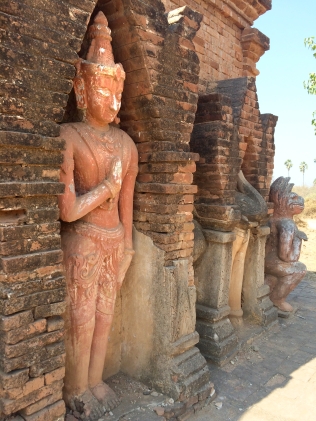 Horse and carts are used in Bagan as transportation for locals and tourists. The difference between the horses used here and the horses I saw on Gili Trangawan Island is, the horses in Bagan are treated well. The drivers park the horses in shaded areas and give them food and water when they are not working. I’ve also seen them swatting flies away from the horse’s face and body while they are waiting for passengers to approach them. I don’t condone animals being used for transportation but I do feel better when I see them being treated in a kind manner. In Bagan the owners respect the life of the horse.

Cows are also used to pull carts for transportation in Bagan. The cows are dressed in beautiful headdresses and are parked in shaded areas when they are not in transport.  They too are treated with respect.

Sunsets are beautiful from atop a sacred temple. The travel books suggest the Shwezigon Pagoda  to see the best sunset. It was stunning but also had a bunch of bus tours unloading with French and other foreigners armed with cameras. We found out that there wasn’t even a place up high to see the sunset there so we got back on our scooter and found a temple with hardly anyone there. We climbed to the top and saw the most magnificent sunset I’ve ever seen in all the places I’ve been. Saying a prayer on top of a sacred temple at sunset surrounded by sacred pagodas on sacred land gave me goose bumps.

Local people have shops leading up to the entrance of the temples, especially the larger ones. They have this horrible sales technique that hasn’t worked on us once. A person approaches me while I’m looking at the temple or walking in, they tell me the history about the temple. The first few times I thought they worked for the temple or was just being kind. After they explain the temple and small talk, the hitch comes in. “Please come visit my shop” or “have a look at my paintings” is the next line. The problem with these people is they are all selling the same things at different places. They all have told me that their family made this or that.

Kids have approached me many times in Bagan. They are selling postcards, asking for food or asking for “American coin for my collection”. I bought some chicken crackers to feed the stray dogs but ended up giving them all away to children. After I was approached a few times, I bought cookies and started giving those out instead.

Two young boys asked me for an American coin at one of the temples. I told them all I had were cookies and Malaysian coins. I looked in my backpack and gave them all my Malaysian coins. One of them noticed my lipstick in the bag and asked for that too. He said he wanted it for his mother. I told him no on that one. Doug walked over to take a picture and they ran straight to him. They were in awe of the hair on his arms. They kept petting his arms and looking up at his face. One of them wrapped their arms around Doug and didn’t let go.  They were amazed. These boys were no more than 12 or 13yrs old. Both of them had red stained mouths and teeth from betel nut. I can only imagine what their teeth will look like five years from now.

My first night in Bagan, I bought a wooden horse puppet from a wood carving shop across from the hotel. Out front the guy was carving wood and had all of these beautiful puppets hanging. When I bought the puppet, the lady selling it to me said her son made it and she painted it herself. She even showed me paint marks on her hands. I felt great about my purchase and supporting an upcoming artist. The next day I saw at least 300 of the same horse puppets at every temple and every store in the city. I named that hustle at the wood shop the Burmese twist. As the days went on, the Burmese twist happened often.

Things were going great on my scooter until the last day. While making a left turn, I got into an accident. A guy on a motorbike hit the back end of my scooter and went flying off into the street. It was horrifying. I raced over to him to make sure he was alright. He kept grabbing his right side and seemed shellshocked. By this time three other people pulled over to check on him. We got his motorbike off the street and that’s when I noticed a red stain on his shirt where he was grabbing. Fearing it was blood, me and another lady opened his shirt. Luckily it was a stain from the paan he was chewing. When he was squinting in pain and it looked like he had a mouth full of blood but that was the paan. He kept looking at me repeating “it’s okay, it’s okay”. I tried to give him 20,000 kyat ($14.00/USD) but he refused. I put the cash in his pocket and rubbed his back. He got on his motorbike and kept going. That shook me up for the entire day. I felt horrible and decided to do something else beside drive around and see more temples. I ended up getting my hair done and Doug got a massage.

The salon I walked into didn’t have a name. It just had posters of hair color advertisements and the door read “hair salon”. No one spoke English but we agreed on $7.00 (USD) to have my hair colored, washed and blow dried. The lady was really good and the whole process took an hour and 15 minutes. I left feeling so much better and I looked like a girl again. I have been taking advantage all over Asia of having my hair done so cheap. In America going to a salon for a blow out can cost anywhere from $35-$200 (USD).  Doug had a Burmese massage while waiting on my salon appointment, his one hour massage cost .80 cents more than getting my hair done.

Myanmar has been the least expensive country on our trip. Unfortunately the room rates are higher because there aren’t as many hotels around but they are much nicer and more comfortable than some of the budget hotels throughout Southeast Asia that I have seen.

Bagan is one of my top favorites during this trip. I loved the town, the people and the sacred temples. Being here brought peace and tranquility to my head and inspired me to be kind and more patient towards people. I found myself praying daily for friends and family members. This is a special place I will never forget. There was a powerful spiritual feeling in the air. It reminded me of the aloha spirit in Hawaii.