Upon arriving here you could see the white sand on the shorelines I knew it was going to be a beautiful place right then as we pulled up. I could see that the beaches were saturated with boats parked, but that was ok because this was just the loading dock area.  My heart fell in love with all the beauty here immediately. It was like an oasis. The ride was about an hour from Amed to Gili Trawgawan. We made reservations for the fast boat. Thank God we were first to get on and get a seat. The last six people to get on the boat ended up standing the entire time. I felt bad because everyone on that boat paid the same price, trusting they would ride in comfort the whole way. Thankfully our resort offered free transportation to the next island because we were staying at a sister property of theirs. The line for people leaving this island was a madhouse.
There are no cars, electric vehicles or electric scooters allowed on the island only walking bicycles and horse and cart. Yes I said a horse and cart. We paid 50,000 rupiah  to get to the hotel by horse and cart the horses are not the kind that you’re used to seeing. They’re very small but not miniature horses, almost like ponies with a horse head. They are beautiful.
The strange thing is that this island is heavily populated with Muslims. Which is kind of hypocritical because some of them cater to the party crowd. Everywhere here sells and promotes alcohol. The convenient stores have condoms front and center at most of them  and there are tons of tourist riding bikes in bikinis with boobs jiggling from the bumpy cobblestone roads. Some of the women selling the alcohol, renting rooms and bikes have everything covered up. They won’t even show an arm. I can’t understand it. There is a hotel called the Horizontal Hotel. There is a BIG sign that reads “What is your favorite position?”  We don’t even get that crazy in Vegas. But the sand is white and the water is warm. We stayed at a place called Scallywags. It’s a high end hotel ($105/nt) and we were there 4 nights. We rode our bikes around this island in 45 minutes so that should give you an idea how small the island is.
This is my animal report on Gili Trawgawan. There are the obvious cidomos (horse and carts). I also saw two bareback horses being ridden. I am an animal lover for all creatures big and small. I actually love them more than I would a human being. My first impression was they looked to be in great condition. After being on the island for a few days my thoughts changed. I felt horrible for them. Some of the horses are foaming at the mouth because they are thirsty and overworked. I did not use this as a means of transportation (once I saw this) during the entire stay. Later I witnessed them carrying cases and cases of heavy loads and being pulled by their mouths to turn around or to go in a different direction.I despised seeing them carrying tons of weight and sometimes entire families with all of their luggage on the carts. My prayer is that the people here find another way to transport these items instead of using a life to do it.

There were turkeys and chickens too. I approached a few turkeys out of excitement.  They flared their feathers up and started walking towards me in an aggressive manner. I didn’t realize they could be aggressive but their body language was telling me to get the hell away and fast. I’m not a cat person at all I’m more or less of a dog person or wild animal person but let’s talk about cats. This island is inhabited by feral cats. I can now understand (a tiny bit), why people like cats as pets. The cats here have sharp claws. I’ve witnessed them sharpening them on trees on the beach.

Most of the restaurants here offer seaside dining options and that’s where I saw the most begging cats. Who knew cats begged? This was one of the highlights of my dining experiences, feeding the begging cats. They had this loving look in their eyes that I could not resist. Even when they swipe the food out of my hand with their claws.

Sometimes, there would be two and three begging cats under my table and chair at once. Once, a huge catfight broke out, which is very loud by the way. Causing all kinds of attention. I’m not sure what the proper etiquette is for feeding cats during dinner but I saw other people doing it so I didn’t feel as bad. Either way, I was feeding them. On the bright side at least no food was wasted.

The beaches here are beautiful. The problem is you can’t get in it. The shorelines are filled with sharp coral. It’s actually entertaining to watch people get in without scuba shoes on. The coral is so sharp it’s nearly impossible to get past your ankles some cases. We bought reef shoes on the island of the Amed so we were fully prepared. It would really suck if you came out here thinking you could just walk right in and couldn’t get past your knees.

I saw a lot of that during this trip here. Most people never made it far enough to even submerge themselves to cool off. Some people just gave up. It was sad because I know they probably rented the snorkel gear and never made it past the shoreline. Never the less, it was so funny to watch.

One of the highlights of Gili Trawgawan was the Turtle Conservatory. This was the first place I wanted to stop at. I was looking all around for this huge building. It turned out to be an open aired wooden platform with a roof, just steps away from the ocean. It was mixed in-between all of the restaurants and bars.  There were 3 three large shallow tanks full of baby sea turtles. They were so small. They are kept there for one year and then released into the sea. Most baby sea turtles don’t even make it into the ocean. The birds eat them before they get to the sea. Then their chances aren’t that great once they get to the ocean because they are snacks to other sea life. Only a few make it to maturity. This conservatory gives them a running start at growing up into adults. Outside of the conservatory on the beach is a screened in cage. The sign reads “turtle eggs”.  I couldn’t see anything in the  sand, but was told there were eggs in there. A small donation box is attached to a tank. I donated 2,000 rupiah thinking I was giving a mid size donation. Later I found out it was less than six cents. I still haven’t gotten the money right. I thought 2,000 of anything was a lot. Not here.

The best way to get around this island is to rent a bike. I don’t really like to walk around towns. It seems logical to rent transportation anywhere just to cover more ground in a short period. The bikes were a great decision. Even though the island was small, we covered the entire island in one day on a bike. That also made it easier to see where the restaurants were off the main drag where it was loud and busy. Not to mention, the prices go down for food when you venture off the main road.

Bikes were available for rent everywhere.  We paid about $4.77 per day for the bike. Some people paid double that price for a bike with bigger wheels. The wheels were intended for sandy areas.  They were larger, heavier and actually not needed. Even with the big wheels, the bike had to be pushed through the thick sandy areas. There were only  a couple of sandy areas to push the bike through and we walked the bikes along the shore to make it easier. The rental places give you a lock included.

And did I mention the cigarettes? If you’re a smoker this is sure to deter you and or at least make you think twice before buying. Every single pack of cigarettes here has a picture of some extreme case of disease that’s caused from smoking. I have to admit when I first saw it I was a little squeamish. The prices are significantly lower here for cigarettes and United States. For instance in New York City a pack of cigarettes is $13.00. Here in Indonesia they are $2.00.

Nightlife is everywhere here. For those who like to party or have a serious drinking problem, this is the place to be. I quit drinking a few years ago. My nights here consisted of eating fabulous food, drinking fresh fruit juices and occasionally watching a local band. One night I witnessed one of the largest Jenga games on the planet. 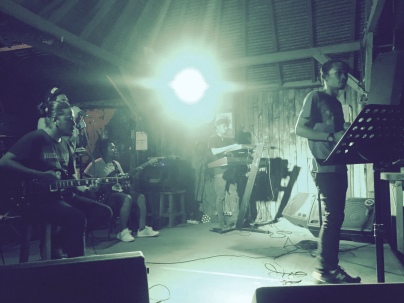 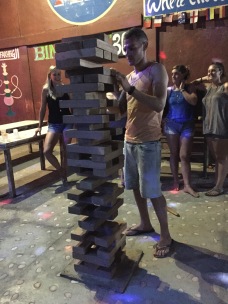 Overall I really loved Gili Trawgawan. The people were genuine and they do their best to cater to all tastes.  It’s a long way from America but well worth the travel. I hope to return again someday. The next stop is Gili Air Island. The information I’ve received is that its completely laid back with far less tourist and noise.