Amed was a pretty cool place. We took a private car from Munduk to a Amed. The cost was about $38USD. It was a three hour car ride. It probably could’ve been a lot faster, but the roads are narrow and the car was behind lots of motorbikes and dodging through people, so the driver went about 25 mph at the fastest point. Our driver did not speak much English nor did he want to participate in my iPhone translator app.

This was a big change coming from Munduk. Amed is town by the sea. The hotel we stayed at was Hotel Kubun a.k.a. Café Amed. This hotel is unique in the sense where it was divided by the main road. On one side of the road was the old part of the hotel with rooms based around the swimming pool and garden views. On the other side of the road was the restaurant and newer rooms that were built overlooking the ocean. Thank God we reserved the newer rooms because we took a little looksee at the older rooms and there was no view of anything. One of the pools was green with algae or something. When I asked the lady about it she said it was “under construction”. Whatever that meant. The main pool was beautiful, large and sparkling. But who comes all the way to the sea to sit by the pool?

Realizing that the best way to get around (and truly the only way) is by motorbike. Doug doesn’t have really any experience riding a motorbike and neither do I but we rented one anyway. No credit card deposit or paperwork was required to rent one. Only $4.09/day, a promise to bring it back and we were given the keys with two helmets.  Of course I had to sit on the back because Doug doesn’t trust me to drive. I bitched most of the time in his left ear because he wasn’t going fast enough. Old ladies and kids were passing us as we barely gave it enough gas to get up the hill. The good news is after a couple of rides he got the hang of it and we are in the flow just like everybody else. On the way to a temple we got behind some kids riding in the back of a open bed truck to school! This would never be legal in America!

We took a 30 minute motorbike ride to a beautiful sacred water palace called Tirta Gangga (see:https://en.m.wikipedia.org/wiki/Tirta_Gangga). Tirta means blessed water and Gangga means holy river. It was probably the most beautiful water garden I’ve ever seen. It was once a royal palace but now its open to the public to enjoy.The water of Tirta Gangga Park has always been regarded as holy and is regularly used for religious temple ceremonies. There is a pool to “swim” in. The water is freezing cold but it’s sacred and holy. The belief is, if you get in the water, all of your past sins will be washed away. Of course I had to get in there. I just kept thinking of the rewards as I stepped down into the freeling cold water. Only 2 other people were in there. No one stayed long, just enough time to get wet and get out. I despise being submerged in cold water.

There were so many beautiful statues in the garden. Some were kind of scary too. 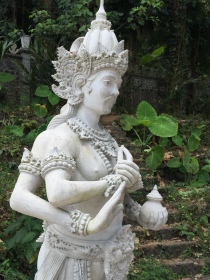 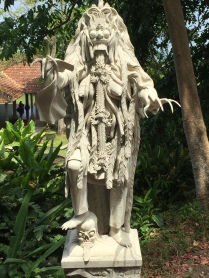 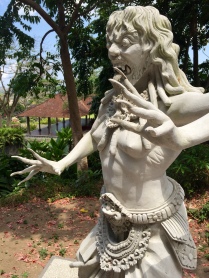 This village still keeps the integrity of the culture, along with tourist, scuba divers, snorkelers, beachgoers and party people alike. Most of the restaurants were empty and that seemed to be a red flag. But after having it repeatedly beat it in my head that it was not “high season”, having personal chef is a great way of looking at it.

The ocean activities were snorkeling and diving. Dive shops were scattered throughout the city of Amed.  Snorkeling tours were offered at many places too. The ocean has a very rough shore lined with coral. Without reef shoes it’s nearly impossible to walk in. When the tide is low the coral is visible and all different heights. We went to an area where we noticed a lot of snorkelers. The snorkeling wasn’t very good. All of the coral was dead and there weren’t many fish around it. That’s when we realized how important the tours were for people who really wanted to see something amazing. At one point we saw snorkelers walking all over the coral to get out of the ocean. No wonder it’s all dead.

Every guest house on the beach had a restaurant (or vice versa). Some restaurants had lounge chairs set up in the day for guest to enjoy the beach. If you are not a guest at the hotel, you are welcome to use their chairs all day if you buy at least a drink or a meal. Café Amed had lounge chairs that we used (as guest of the hotel). Everywhere offers free wireless. Hotels, cafes, dive shops and warungs all offer free wireless. All you have to do is ask for the password. Getting a good connection and keeping it is a separate issue. Some of the worst connections we experienced was at our hotel. It’s very frustrating to get any work, reservations or downloading photos done because of the spotty connection. Even if your working right under the router it’s still slow.

Overall, Amed is a cool place. The local people were very friendly. Coming from America I find myself still being on guard when the locals asked “where are you staying?”, “How long are you staying?” and the common “Helloooo”. All of those questions automatically make me think they must want something or want me to buy something from them. I was wrong. The people I have met and the ones I just traded smiles with, have been the most genuinely kind people I’ve seen. Not once did I feel unsafe or worried about theft or scams. Just a laid back atmosphere and kind hearts.