After a short 90 minute ride from Osaka on the Shinkansen high speed train awaits Hiroshima. Hiroshima is the capital of Hiroshima Prefecture in Japan. Sadly Hiroshima is also the first city to experience a nuclear bomb explosion.  This tragedy happened at 8:15 a.m. on August 6, 1945.

The Hiroshima memorial museum is located less than five kilometers away from where the first atomic bomb struck a city on earth. This museum is built to memorialize the victims and catastrophic devastation that nuclear bombs cause on living beings and vegetation. A huge park appropriately named Peace Park surrounds the small museum with large sculptures and memorials within a grassy and paved area. 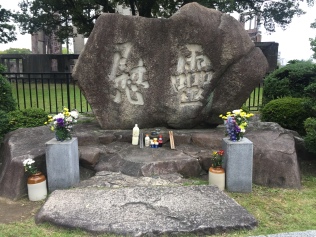 On August 6, 1945, at exactly 8:15am a United States war plane named Elona Gay dropped a nuclear bomb code named “little boy”  on the town on Hiroshima killing 70,000 people instantly and destroying everything in sight within a 9 kilometer radius. Within five months the death toll rose to 160,000 people. Years later many others died of health related problems such as leukemia, radiation, cancer, etc.

This was the first time a nuclear weapon had been used on a city. The United States used this in retaliation to the bombing of Pearl Harbor. This act of war ended the war with Japan two days later.  Sadly many innocent people fell victim to this governmental war.

The saddest part of my visit was listening to first hand accounts by surviving victims via video clips. A section of the museum has artifacts and victims clothing, photos and parts of buildings on display showing the devastation and ruins as a result of nuclear power.  Most of the victims were burned severely. Some of the human’s imprints were burned into permanent shadows in walls and on the ground.

The Hiroshima Peace Memorial, commonly called the A-Bomb Dome is part of the Hiroshima Peace Memorial Park in Hiroshima, Japan and was designated a UNESCO World Heritage Site in 1996. This was very sad to see because it is the biggest piece of construction still standing from the nuclear attack. I just kept staring at it wondering what it must have seen or endured that horrible day. Now there are fences with alarms around the area so it’s impossible to get really close but the message is very clear just by seeing it.

On a lighter note, Hiroshima is known for okonomiyaki   . Hiroshima has their own version and the city prides itself on serving the best okonomiyaki in Japan.  Okonomiyaki is a Japanese savory pancake made from noodles, meat or seafood, cabbage, bean sprouts, fried egg and a crepe. The crepe is cooked on an open grill with seating around the grill itself. People can sit along the grill and eat the pancake straight off the grill in front of them.

Okonmiyaki is a rich dish and eating just one can be very filling.  Some of ingredients vary from place to place but the base of noodles, cabbage, egg and crepe stays the same. 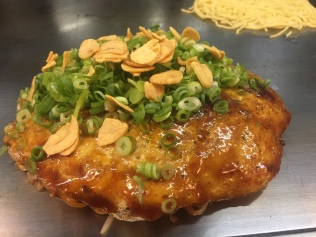 The crepe is cooked on an open grill with seating around the grill itself. People can sit along the grill and eat the pancake straight off the grill in front of them.