There is so much action everywhere and people here spend a lot of time outdoors. Whether they are eating, working, transporting or relaxing, everyone is outside on the streets. Naps are a daily scene on the streets too. 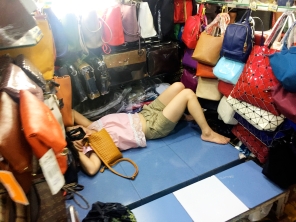 The prices in Vietnam are the least expensive anywhere in the world. The currency starts in the thousands so it’s very hard to figure out the exchange on the spot. For instance something costing 40,000 dong is equal to $1.36 (USD).  Menu items, hotel rates and clothing can run into the millions which equals less than $50.00 (USD).   A two hour massage with hot stones in a beautiful spa cost $24.00 (USD) for two people. This was the deal of the century. I can honestly say I am a millionaire in Vietnam. One of the downsides – locals look at Americans as walking money bags. If your not careful they will take full advantage of you. I found this out when we sat down at an outdoor cafe. While sipping on fresh coconut shakes served in a coconut we were approached by numerous street vendors asking us to buy magnets, cards, bookmarks, keychains, sunglasses, wallets, lighters, cigarettes and bracelets.

Even though the prices are cheap, the locals still try to rip tourists off.  We have to constantly be on guard of this. I believe there are local prices and tourists prices. A local explained if you ask what the price is be prepared to buy it. It’s rude to ask how much something is and not purchase it after hearing the price. Everything can be negotiated  once you ask the price, it’s going to be a process getting to the bottom line.  After visiting the Bến Thành Market, I received a crash course in the art of negotiation and getting ripped off. They start off extremely high and as soon as your frustrated and pissed off walking away, they fold. It’s exhausting and a real mind trip. The Vietnamese have an art in being super friendly, playful and nice until you start dealing.  At the end of the deal that all washes away and it’s just you handing them money and walking away feeling like you just insulted them. I bought a couple of Under Amour shirts with the patented heat gear protection. My size in this brand is normally an extra small but here in Vietnam I fit size large.  I learned real fast the “heat gear” is just written on the tag and the material used actually attracts and holds the heat. It just looks like the original material but isn’t. I felt like I was wearing a polyester shirt in 90 degree weather. It looks real and even has inspection and registration numbers on the tags. I noticed in the fabric section of the market, designer tags and labels being sold separately to sew on the clothing yourself.

Vietnamese women go great length to protect their skin from the sun. Despite the hot and humid weather, women will wear jackets, hats, gloves and socks when working outdoors. It’s unimaginable to me but very common here. Their skin is very light as a result. Wearing mouth mask is now a common sighting in Vietnam. Stylish mouth mask are sold at street markets and even the kids are wearing them.  Unlike the surgical mask Chinese wear in public, in Vietnam they are colorful with printed patterns.

The traffic in Vietnam is one of a kind. There are no signals, street lights or signs indicating what to do. Locals know how to drive and cross the streets without fail but a visitor might die trying.  The art to crossing the streets of Ho Chi Minh is to walk slowly and let the drivers go around you. It’s very hard to do without worrying your going to die but with patience and pace you will make it across. Between the horns, cars, motorbikes and people on the roads I don’t know how there isn’t an accident every second. Today there are more cars and buses on the road than ever and they still harmonize with the thousands of motor bikes. I spoke to a local lady who said she’s been driving a motorbike since she was twelve and hasn’t been in any accidents.

Vietnamese coffee is one of the the countries highlights. The beans are grown in Vietnam. Instead of brewing the coffee through a filter, the beans are ground then drained directly into the cup. The serving size is 1/4 of what American’s are use to drinking per cup.  Vietnamese coffee with condensed milk is the traditional way it’s served and/or just plain black. Both Doug and I are fans of the iced version. Drinking coffee is a social occasion for locals and it’s served with complimentary tea when ordered at a coffee shop. As Saigon grows in infrastructure and people, more and more coffee shops are popping up around every corner. The shops range from hole  in the walls to trendy upscale comfortable lounges. 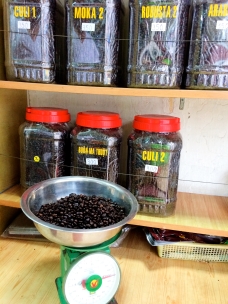 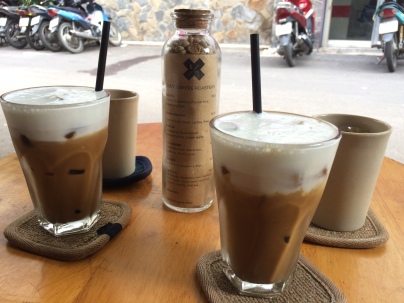 Things really get started late in Saigon (Ho Chi Minh City). When the work day ends another aspect of this busy city begins. While visiting the backpacker’s area in District 1, people were crowding the streets eating, drinking, dancing and entertaining. Street vendors are set up along the sidewalks selling everything from lighters to street foods. It’s a really happening scene and the guest of honor are travelers from all over the world. Even the alleyways have tables and mini plastic stools set up to sit and enjoy smoothies and street food. With just enough room to walk in between the people, motorbikes are still weaving their way through. It’s madness.

Over the years this city has grown with the times progressing at a rapid pace. The cool thing about Saigon (Ho Chi Minh City) is the old school charm that still shines from beneath the new changes.  Traffic runs smoothly despite any traffic lights or signs, people still dine on the curb sitting in mini plastic chairs, street vendors still wash dishes on the curb using a large bowl and soapy water and the electricity lines are still exposed and grouped together in a madness only a Vietnamese electrician can understand. I fell in love with Saigon at first sight years ago and the feeling still remains the same.