The proper pronunciation is Mo-or-ray-ah. The only thing I knew about the island previously was it was a popular honeymoon destination. The island is full of greenery and reminded me of what Hawaii must have looked like fifty years ago. Even though Moorea is a tourist destination there are only a couple of big chain resorts and the rest are small hotels, guesthouses and mostly locals living island life.Flying to Moorea from Huahine was one of the shortest flights we’ve taken so far on our world trip.  The entire flying time was under 25 minutes.

Renting a car was the only way to get around the island, unless you were staying at the Hilton or Intercontinental which have their own transportation for incoming guest.  Once we got into the air-conditioned Avis van from the airport, I knew this was going to be a great place. It had been a weeks since we felt the cool air of air-conditioning and it felt good. Pair this with beautiful scenery and knowing we were going to sleep in air conditioning was a high in itself.

We stayed in a small hotel called Sunset Moorea Beach Club and were so happy to be back in an air-conditioned room with western comforts.  Most of the locals live in homes along the water and like the neighboring islands, do not have air conditioning or screens on the windows. I don’t understand how they make it at night with all the mosquitos and bugs flying in and biting in the early morning and evenings. We were also very happy to have access to a wifi network so we could use our computers again. The internet connection is coming from Tahiti and sometimes it was super slow and other times it was just slow. Surfing the internet was okay but downloading any pictures was impossible it seemed.

The only way to describe the island is stunning. The mountains are covered with lush jungle and the roads are lined with manicured foliage and palm trees. Most of the stores were small and the far between.

Because this is French Polynesia, there are many French foods chestnuts in the grocery stores. One of them being my favorite food in the world – foie gras (duck liver).  Foie gras is expensive everywhere and seeing it sold in many forms at the grocery store for a third of the price paid in restaurants was heavenly.  In some places you could purchase an entire liver for roughly $75.00 (USD), but it takes a talented cook to know how to cook it properly without it turning into a pile of melted fat in the pan.  French bread is a staple in French Polynesia with French and Tahitians alike.  The bread is sold without packaging so everyone has touched it before it reaches a mouth. After seeing it sitting out for all to touch and grab, I never bought it being a germaphobic. But strangely I eat it at restaurants when it’s brought out before the meal.

The beaches are much sandier than in Bora Bora and Huahine and the water is shallow and warm around the coastline. It’s so easy to just walk right in and stay in because it’s so warm. I love it.  I also love seeing the Tahitian locals.  Their skin is golden brown and literally glistens in the sun when they are on the beach.  It’s very common to see topless women at the beaches on Moorea. Locals and tourist alike swim and sunbath topless. The locals I’ve seen are mostly swimming topless but put their tops back on when they get out of the ocean.  This is something I would have done in my twenties but now that all my insecurities have grown up, it’s out of the question.  Besides I would feel strange being topless in a family environment with kids on vacation. I saw an Australian family and the mom was topless with her son and husband. I just thought the whole thing looked weird. But the Tahitian women seemed to look more natural – make sense?

Fruit stands are all along the roads. Bananas, pomelos, limes and coconuts are displayed on tables for people to stop and buy. Normally there is a person sitting close by but in some cases it’s in a front yard and the person comes out when they see a prospective buyer.  We bought pomelos from a few of these stands and all but one were sweet.

Breadfruit is a staple in French Polynesia. The weird refer to it as a potato. It has the taste and texture of a potato but I think it’s even better. We’ve had them grilled with butter and fried with salt. Both ways were really good. I’ve seen this in Asian markets in the United States but they look so intimidating. They are shaped like pineapples without the bushy stem and covered with thick bumpy skin. 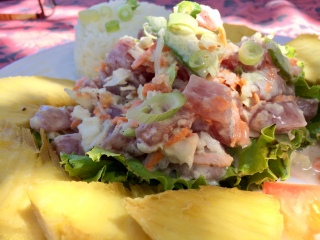 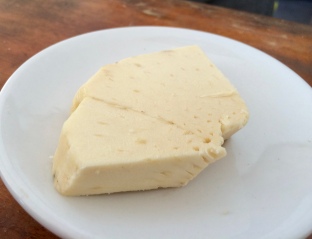 A pareo is a lightweight Tahitian garment that is similar to a sarong or wraparound skirt. I have always known them as sarongs but here they are called pareos and are a bit larger than the Asian sarong. These are sold everywhere in French Polynesia from gift shops to grocery stores. Most women wear them to the beach or as skirts. A local artist named  Nathalie hand paints pareos at a gallery she shares with three other artist called Natural Mystic. This is where I bought the most beautiful pareo with gold glitter lining around the flowers. Unfortunately the glitter shed everywhere and especially the rental car. I tried numerous times to shake the excess glitter off but it was endless. Needless to say I can only wear this if I put it on outside and don’t sit in anyone’s vehicle. Some people travel to French Polynesia to get tattooed. The process is done with bamboo needles and the tribal patterns have significant meaning in the Polynesian culture. It’s a painful process but it’s done in a ceremonial way that holds meaning. There were a few places I saw personally and I met a guy in New Zealand who came here especially for a tattoo. If your considering a tribal tattoo, French Polynesia is the place to have it done.

I’m learning through my experience with animals around the world that chickens might be tropical birds. I’ve only seen them in tropical places. My animal experience here on Tahitians was hand feeding an eel in the ocean. He popped his head out from under an ocean rock and I hand fed him meat from my egg roll. It was scary at first but he actually took it gently from my hand and then came all the way out of the rock looking for more when it was gone. Once I saw his long white snake-like body I ran out of the water.

After a long winding narrow road trip we arrive at Belvedere Point. This is a famous lookout on the slope of Mount Tohivea. Mount Tohivea is in the center of Moorea. Roosters and chickens were walking around the parking lot and of course I had to feed them some of my bugels.  Which they loved by the way.  Even though the drive up was scary in some ways, it was well worth it. We had the option to hike paths in the mountains but the mosquitos and heat kept us from venturing out. On the bottom of the mountain is an agriculture high school.  Aside from the school were many farms covering miles of land growing  pineapples and potatoes. The farmers give the pineapples to the Moorea Juice Factory.

Moorea Tropical Garden is a plantation garden on the foothills of Mount Rotui. Getting here was scarier than Belvedere Point because it’s at the top of a  rocky steep hill.  All of the rental cars on Moorea are stick shifts and our car’s transmission wasn’t up to par. After literally burning rubber for minutes (and having an audience watch and laugh at us from above) we made it to the parking lot. We seriously thought we weren’t going to make it. The car wouldn’t move despite being in first gear with the petal to the metal. After we parked the car, them smell of burnt rubber permeated the air. People sipping fruit drinks on the patio later told us they didn’t think we were going to make it.  We enjoyed a fresh fruit drink and a sample plate of homemade fruit jellies then walked to their vanilla greenhouse.  This is the first time I’ve seen vanilla plants. I still couldn’t figure out how they get the pod from the plant but it was nice to see.

The beaches areas on Moorea aren’t the vast sandy beaches one would imagine, instead they are coastlines with limited sandy shores. The two beaches we spent the most time at were Temae Beach and Ta’ahiamanu Beach. Tamae Beach shares the shoreline with the Sofitel hotel and is popular for tourists and locals alike. There is a sandy coastline (depending on the tide times) and the ocean floor doesn’t have as many coral rocks as other areas making it easy to walk in without hurting your feet or worrying about large coral.

Ta’ahiamanu Beach was my personal favorite. There are many picnic tables and grassy areas to sit and relax along the water. The shoreline is even to the ground and the ocean floor is sandy. The only drawback is there are very large coral rocks throughout the shallow swimming area, but once you get past the shallow areas there are large areas in between the rocks to swim around. The rocks make this a great snorkeling area. I brought a french loaf in the water and attracted tons of tropical fish.

Part of our travels in dining where the locals eat. In Moorea we found a few places that served some of the best local dishes we’ve had in French Polynesia. The two most memorable were Snack Mahana and A L’Heure du Sud.  Both are chef owned and operated serving local cuisine at local’s prices. I’ve learned from many restaurant experiences, when the chef/owner is present and cooking in the kitchen the food is going to be ten times better because they add pride to each dish. Unlike in Las Vegas where celebrity chefs paste their names on places they don’t even cook or let alone specialize in the dishes. 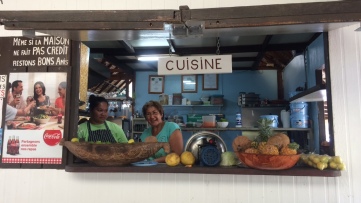 Moorea is one of those places we were really sad to leave and knew we would be back again someday. Our departing flight was on a Sunday and most places are closed in town. Arriving at the airport, it felt like a ghost town. The only thing open was the Air Tahiti desk and the luggage handlers had their flip flops on playing guitars waiting for the plane to arrive. Once they heard the plane they changed into covered shoes and put their ear muffs on. Chickens seemed to have top security clearance and were roaming in from outside, through the check in and onto the empty runways. This is a place we will return to.