Coromandel Peninsula extends 52 miles along the coast. It acts as a  natural barrier to protect the Hauraki Gulf and the Firth of Thames on the north island of New Zealand. This has become my favorite part of the north island. Not only is it covered in natural rainforest, it’s peaceful, clean and lined by the sea.

Driving to Coromandel we took a turn down a road called 309 Road. This was a semi gravel road leading to our rental apartment. We chose to take the long road around the coastline instead of saving an hour on the direct route.  About 1/4 mile into Road 309 we encountered a large group of wild pigs and piglets on the road coming from a hole in the fence. 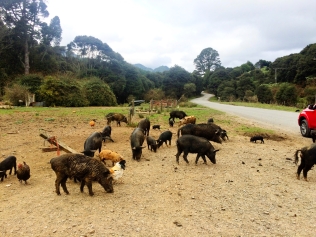 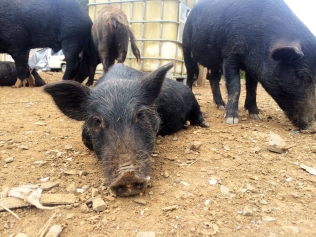 Of course I had to get out of the car and greet each one. After admiring all the pig noses and feeding them sliced bread, chips and tortillas we continued up the road to more and more pigs along the way. It was bizarre but funny. A man who lives close by takes partial care of them by leaving signs for people to leave food over the fence so they don’t get hit by cars. He also had a bunch of junked furniture and cars around that the pigs sleep in. People were stopping and leaving food, taking pictures and even picking the babies up. There was a huge sign that read “It’s okay to pat the pigs”. I didn’t want to touch them because they were filthy and covered in mud and dirt. The smell was horrible but then again, they were pigs.

Hot Water Beach was another travel experience of a lifetime.  During low tide areas of the shore expose the hot springs under the sand.  People bring shovels to the beach and dig a hole in the sand to make themselves a hot tub from the hot spring water. Our hotel provided shovels but there are places that rent and sell shovels just for this purpose. We arrived at the beginning of low tide and were lucky enough to get a prime spot. Some of the areas are too hot to dig without burning your skin. I made the mistake of using my toes in one area and it felt like boiling water. No wonder that area was empty.  Everyone there was digging their own holes.  There are two things I’m  good at, digging a hole and being in hot water.  Take these two things and combine them with a beach and I’m gold. Sitting in the warm water was so relaxing and it had to be great for the skin.  The ocean was rough that day and we witnessed two rescues in the rip tide. I was happy as a clam just sitting in the puddle, I didn’t deal with the ocean.

Cathedral Cove is a beautiful national reserve ending on the coastline of the peninsula. People come from all over to hike this trail during the low tides. Thankfully the pathways are paved to the coastline. During the hike we encountered a group of cows grazing on the mountain overlooking the sea. They seemed really relaxed despite all the hikers taking their pictures and stopping to stare at them.

After a thirty minute hike we arrived at a beautiful bay called Cathedral Cove. Huge mountain rocks have formed a tunnel connecting to another cove.  For people who are unable to do the hike, a ferry boat will take you for $25 (NZD) round trip.

There are so many natural wonders in New Zealand, just when I think I’ve seen the most beautiful thing here, something more amazing is right around the corner. 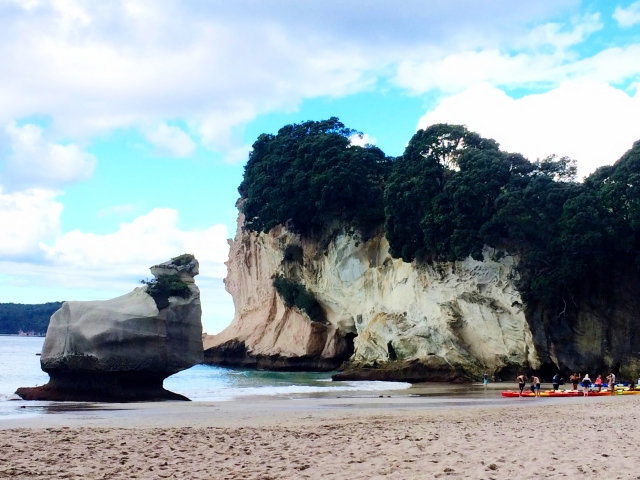 A backpacker suggested we stay at the Tatahi Lodge so we booked four nights there. By a twist of fate we were upgraded to the villa.  This villa is actually a small modern house on the property with a privacy fence and two bedrooms. We loved it so much we wanted to stay two extra nights. Of course it wasn’t available for the extra nights, not to mention any place in the town of Hahei. On the last night we were so sad to leave and were uncertain what kind of place we would end up sleeping in for the next two nights.

We stopped at a place called Solscape to have lunch. This is an eco friendly village that believes in sustainable living.  They have a section for travelers to stay and a restaurant named the Conscious Kitchen that only uses organic plant-based cuisine. They have a program that educates about the environment and protection of the land.  It seemed like a pseudo hippie commune. After ordering two great salads and a slice of snickers cake, we explored the property. It sounds like a great idea but the lodging was a little too campy for our taste. I don’t mind helping to save the environment but sleeping in a yurt for days didn’t  seem too appealing.  Especially having to go outside and through the camp to shower or use the bathroom.

My favorite part of the property was the butterfly garden. Seeing a new butterfly emerge from a cocoon was spectacular.

We found a new hotel in the town of Whitianga.  On the way, we stopped at Waiau Falls. After a short easy two minute walk from the side of the road and we were at the base of the waterfall. It still amazes me how close these spectacular sights are to main roads.

Just when we thought we had the best set up in Hahei, we get an even better hotel in Whitianga. Our room overlooked the ocean from directly across the street.   So far everywhere we stayed has been nice in New Zealand. The people of New Zealand take care of their property keeping it spotless and updated.

Since we were facing east, it was easy to see the sunrise.  We didn’t have to leave the bed to see it.  As with all sunrises, it was beautiful.  My heart dropped knowing it was our last day in Whitianga. From here we are staying in Auckland for two nights then flying out of New Zealand permanently.  It’s always sad to leave a place you love and knowing everything comes to an end. Especially leaving fun stuff.

Otama Beach is vast, beautiful and empty.  The beaches here are so spectacular yet deserted. We loved being the only people on the beach in the middle of the day.  We went while the tide was heading out leaving the beach even larger than it was earlier.  The only beings on this beach were Doug, myself and several large albatross. As the water drifted away, lots of clams were exposed on the wet sand. Immediately I started picking them up to take home for dinner.  I remembered seeing a sign saying only 25 mussels were allowed per person from Otama beach, so I figured it was the same for clams on this beach.  After I gathered them up, I started to think maybe this is a bad idea. What if these aren’t the clams they serve in restaurants? What if these are “bait” clams meant for fishing? I weighed the pros and cons, then threw them back into the sea. Not worth it. But it was fun picking them out of the sand.  Just down the road was Otipita beach which had an even larger shoreline than Otama.

This marks the end of our New Zealand adventure. The two months flew by and now I’m left with all these memories of towns, beaches, streets and landmarks to remember for the rest of my life. The one thing that really stood out is how native the names of places are in New Zealand.  The Maori culture and people really stood out and I really loved learning about their heritage more so than anything. They have great pride in this land and there are many sacred places deep within the beautiful landscapes. I will always remember the beauty and it’s overwhelming spiritual presence of New Zealand.