Known for their cassowary birds and natural rainforest, it is protected land and home to most of the dangerous Australian wildlife in Queensland.  The most dangerous being the Australian salt water crocodile. This is considered “croc country”.  Every beach we visited had signs posted everywhere warning people not to go into the water.  Either crocodiles or poisonous jelly fish were spotted in these areas.  I spoke to a local named Aiden and he told me that a backpacker went missing (dead) from a crocodile attack in one of the nearby creeks four months prior and was never found.

It was strange going to all of these secluded beaches in the heart of a beautiful rain forest and not being able to get wet.  During the summer months (November – January) the ocean is infested with poisonous jelly fish (man-o-war, blue bottles, box jellyfish, etc) and enough of their stings can and will kill a human being.  The  man o war jelly fish has tenticles over 30 feet long covered with venom-filled poisonous hairs! Imagine getting wrapped up in that.

Daintree Rainforest is lush and dense.  This is home to the cassowary bird and a number of Kingfisher birds. The beaches along the rainforest are laced with warnings to prevent people from swimming. The creeks around and inside the rainforest are full of salt water crocodiles.  Aiden, my local friend made a zig zag in the sand illustrating  what the crocodile’s tracks look like.

We chose to stay “inside” the rainforest at the Heritage Lodge. We also had to cross a crocodile infested river to get to this side of the rainforest. A huge flat ferry barge runs every 5 minutes taking cars, bikes and people across the river. This same river is the path that crocodile boat tours use daily.

There are so many animals in this rainforest. The cassowaries are one of the largest non flying birds in the world and Daintree is their native home in Australia.  They are large (like an ostrich), black, blue and a touch of red around their long necks (like a rooster). They are also deadly if they feel threatened or afraid.  On the top of their head is a bone that is triangular shaped like a cone. This can be used like a horn to attack.  The cassowary’s foot has razor sharp claws that are used during an attack with their legs. 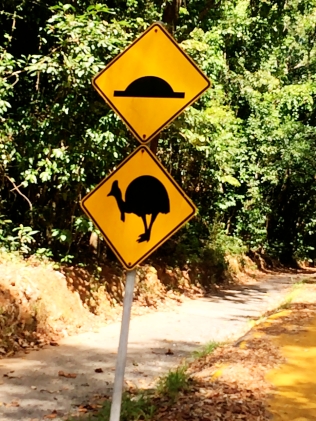 Their diet consist of large forest fruit that looks like a large plum. The cassowary swallows the large fruit, digesting only the flesh and passes out the seed (which is the size of a mango). Only when the seed has been digested is it fertile to grow into a tree. In essence, every time a cassowary shits, a tree is planted.

We weren’t lucky enough to see a cassowary during our 4 day stay but we came close. We had just pulled into the lodge and parked the car.  Minutes later I left on foot to the reception office to pick out a DVD movie to watch later in the room, that’s when I came across a huge fresh pile of shit in the middle of the road in front of our room! Not only was it huge, it was FULL of those seeds. I brought the picture to the front desk and the manager confirmed it was indeed cassowary shit. I had just missed seeing it.  I couldn’t imagine how big that thing must have been.

In order to conserve the rainforest, paved roads and built walkways are installed to drive and walk on without hurting the forest, animal life or people. This prevents people from damaging the eco system that keeps the forest alive.

The Daintree Tea farm was in full bloom and beautiful. Tea and ice cream are the two homemade specialties of Daintree. Daintree Ice Cream is on an exotic fruit farm and the ice cream is made from exotic fruits planted on the farm. We tried the four featured flavors of the day: macadamia nut, whittleseed, plum and soursop.

Even though swimming isn’t recommended we spent the day at Cow Bay beach just admiring the ocean and forest from the sand.  We passed two warning signs that confirmed our fears of the ocean; crocodile area and stinging jellyfish.  The beach is spacious and the water is blue.  Cow Bay is one of the most popular beaches even though no one can swim in it. “It’s fine if you get in and don’t stay in too long”, says a local named Sam as he wades  his kayak in the ocean and hops in right away.

His son Aiden told us about the Christmas beetle. This beetle only comes around during the holiday season. I never saw one but I found it interesting they only appear around Christmas. I did see a horned beetle (dead) and it was pretty scary looking for a bug.

Jindalba Boardwalk is a 700 meter wooden boardwalk through the rainforest.  Walking through and really observing the trees and sounds, it was clear that all life out there is survival of the fittest. The trees were all fighting for a spot to be near sunlight , other trees were growing around trees to pull themselves to the top. Nature was showing itself to us in full swing.

Lync Haven Rainforest Retreat has a wildlife area for guest to see. This was one of my favorite parts of the visit to Daintree. The owner had designed a pseudo animal sanctuary around the cabins. Had I known this hotel was here I would have stayed here just to be around the animals.

Tropical birds, Australian snakes and three different species of wallabies live here.  The swamp wallaby was my favorite. They look like miniature dark brown kangaroos.  While talking with the owner of the hotel she explained how no food really goes to waste. The shavings and ends of the vegetables from the restaurant  go to the wallabies as an appetizer to their pellet dinner. The hotel also host day trips and in their packed lunches is a fruit platter, the leftover fruit goes to the lorkeet birds. She had mentioned the wallabies are fed daily at 5pm.

I came back at 5pm and asked if I could see them eat. This was an experience of a lifetime. I was invited to help feed them and had the chance to get up close and personal with them. As soon as we walked to the gate, they were all waiting at the door (unlike earlier when I was there). I grabbed two handfuls of pellets and literally had them eating out of my  hands. Their little claws grabbing tightly around my hands was such an incredible feeling.  I have never seen a swamp wallaby let alone pet, touch and feed one.

On the northern tip of Daintree is Cape Tribulation. This was named by Captain Cook because of the tribulations he has encountered getting to this area. His boat was stuck in a reef on his way here and things just got worse from there. Now it’s a huge area for campers, trails and a beach. We stopped by Camp Trib campgrounds and took a peek at how the campers were living in the rainforest. Not to mention the wood fired pizza being served from 5-7pm there.  Since there is no cellular coverage in the entire rainforest, we have spent a lot of this visit talking to other travelers and listening to their travel plans.

Mason’s Cafe is in Daintree and known for serving exotic meats. During our visit he had a special tasting of crocodile, kangaroo, emu, camel, boar, buffalo and road kill. To try all of them was $110.00 (USD). We stuck with the kangaroo burger and had him split it in half. The burger was good but after two bites, my mind got the best of me and I couldn’t physically eat anymore. Just knowing how cute and cuddly they are, especially the kangaroo that kissed me at the Curumbin Animal Sanctuary just last week.  I didn’t get a chance to ask what exactly the road kill was.

Walking through the rainforest was beautiful and sad at times. Even through the silence you could see the incredible fight the trees endure with each other for sunlight.  The strangler fig was wrapped around some of the largest trees slowly suffocating the life, water and nutrients from the trunk in order to grown higher and above the canopy to direct sunlight. 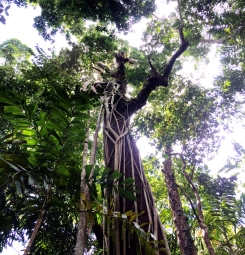 That is the goal of any living tree in a rainforest – to be the highest and receive direct sunlight. One of the trees was pulled down and out of the ground to it’s death, while the strangler fig lived on and attached itself to another nearby tree.

Mangrove trees were along the coast and in the forest. They look like they were standing on all of the exposed branches digging into the ground. so much is going on in the rainforest but without stopping and looking around you would never notice it.

Visiting here was peaceful and beautiful. There is so much beauty in this area and I love the fact that it’s left alone. This entire area is protected and respected by humans. This makes me feel good about visiting a place that respects and protects wildlife and it’s natural habitat.