Burleigh Head is further along the coast. We drove from Byron Bay and arrived in Burleigh Heads an hour later.  This city is  in the Gold Coast of Australia. The touristy area is close to the beach. We stayed in a hotel/condo across from Burleigh Beach. 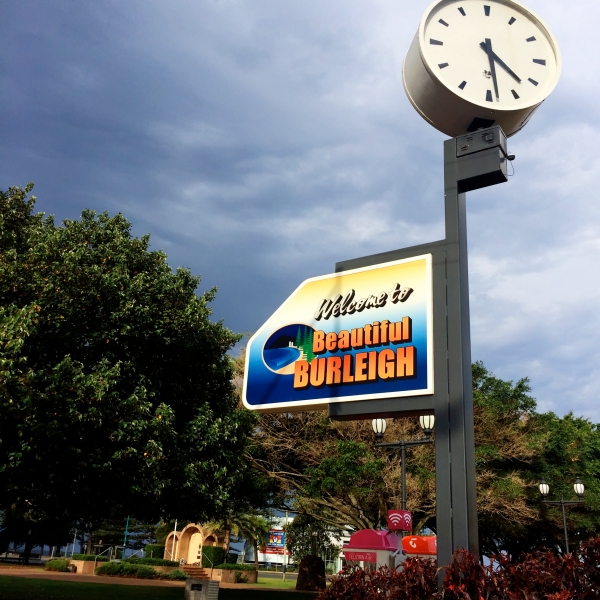 Burleigh Heads National Park is close by. We hiked to the Tallebudgera creek which opens up to the ocean on the way to the national park.  Crocodiles live in this area of Australia, we were always cautioned about going into creeks to swim. Even though they are saltwater crocodiles, they don’t really hang out at the ocean’s mouth of the creek (so they say).

The beaches are spotless and spacious in Burleigh Head.  The national park  has a wooden walkway for people to walk about the coastline with a tropical forest on the other side. Along the hike are pathways to the ocean and beaches. None of these beaches in the national park had a lifeguard but people were still swimming.

The city is filled with coffee shops, shopping and restaurants. The closer to the beach, the more touristy the prices get. This trip we haven’t been spending on fine dining. Instead we have been going to family owned restaurants and local favorites. James street is touristy and full of boutiques, restaurants and shops.  This is the place that I discovered chocolate covered honeycomb. It’s an Australian candy that I overdosed on during my visit to Burleigh Heads.  We made a home in Helen’s Heavenly Bulk Foods buying chocolate covered honeycomb (and other sweets) in bulk.

The beach surf was rough and its fun being in the water.  Burleigh Beach is the main beach in town and watched over by the Life Savers Club. This means swimming in between the flags posted by the lifeguards.

It was hard to swim in the ocean at this beach, the waves were a lot larger once in the water than it looked from the shore. One fo the cool things about this beach is the distant skyline view of Surfer’s Paradise.

Miami Marketta is a weekend food market in the town of Miami (Australia). The food hall features foods from all round the world and a dessert hall.  Live music is played on the weekends but we didn’t stay that long to see it. Instead we tried a few different dishes and finished off with homemade German sausages before leaving.

Since we have been in Australia, our go to dishes are meat pies and fish and chips. Quinny’s Meatpies were rated as the best in Australia. This bakery is a short drive from the city and tucked away in an industrial area.  These were the best we’ve had so far.  It’s still a mystery how the pies stay so hot from the display case. The inside of the pie stays piping hot while the outside is room temperature. 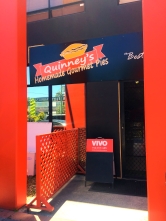 As we spend more time in Australia, I’ve discovered a few junk food items I really like. Tim Tams have been my latest craze here.  Australian company Arnott Brands makes these addicting cookies in all flavors. A tim tam is a thin chocolate cookie sandwiched between chocolate then covered in chocolate. Since the original flavor, the company has expanded to other flavors in-between the chocolate cookies. My favorite flavors are dark chocolate and salted caramel. The company makes a special reserve line of mini Tim Tams called Chocolicious, my favorite flavor in those are dark chocolate. Eleven packets of two come in the  bag, so far I’ve eaten six bags (66 packets = 132 mini tim tams). This doesn’t include the regular size Tim Tam purchases.

My other new discovery is Honey Soy Chicken potato chips by Red Rock Deli chip company. These are the best tasting flavored chips I’ve had so far. My other favorites by this company are the balsamic vinegar and sea salt and the sweet red chili and sour cream flavor. So many choices!

My animal report for Burleigh Heads is the seagulls on the beach. One seagull in particular was around when no one else wanted to talk and shared my love for honey soy chicken chips.  Once the word got out that chips were around this bird got really possessive.

Next stop is Surfers Paradise. We have been looking at the skyline from the beaches and can’t wait to be a part of the action.