Siqijour island is beautiful and peaceful. The area is large and the structures of the houses are different from other islands. Most of the homes and buildings are built with cement and the houses resemble the styles of American homes. There is a wild natural look blended in with the local life.

The ferry-boat ride is about an hour and a half away from Dumaguete. We were two of the three foreigners on the boat. It wasn’t until we took off I realized we had gotten on the wrong boat. A large comfortable air-conditioned ferry full of foreigners sitting comfortably pulled off around the same we did.

This boat was small, packed with locals and no air conditioning. The only good thing about this ride was we arrived to the island before the large boat. It should have been a clue that we were the only people on the boat that had luggage.

Most of the locals drive motorbikes. There are cars but not many compared to the motorbikes. A local resident told me there are many accidents involving foreigners renting motorbikes.

The homes here are built with thick concrete and sealed with windows. Unlike most of the wooden houses I’ve seen throughout Southeast Asia.

The Coco Grove Beach resort is a massive hotel that is built along a beach stretch. It takes about 10 minutes to walk from one end of the property to the other.

A huge wall is built along the road side blocking in Coco Grove from the town.  The Australian owners live on the property. 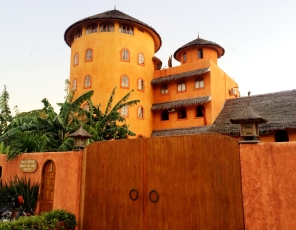 Everything you could ever want in a resort is here. Diving classes, kayaking, island tours, water sports, game facilities, spa, beach huts, restaurants and motorbike rentals. There really wasn’t a reason to venture past the wall they built around the property.

Outside of chilling out on the beach my hobbies are building sand castles and making coral leis. I walk along the shoreline looking for coral with holes and place them around a semi living root of a tree. Afterwards I hang the finished lei on a nearby tree. It’s been my signature on beaches during this trip. 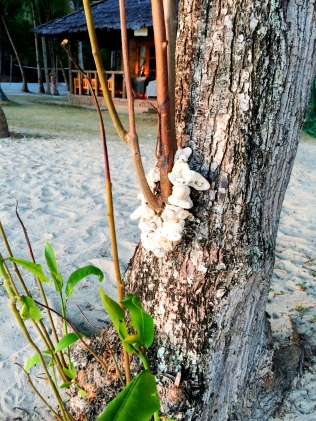 There weren’t many restaurant choices outside of the hotel. In conversation with some of the employees I would ask about outside places to eat and the response was always followed by a finger on the lips saying “shhhhh”.  Two former employees opened their own restaurant down the road called Chekesh. There were only a few tables and half the price of the hotel’s restaurants. It felt great supporting a local restaurant and leaving the hotel to experience the town. Seeing the local life outside of the resort made me realize how important is was to leave such an inclusive property. It’s easy to stay behind the wall and chill with everything at your feet but getting out in the local life is what traveling is all about. A lot of people go home and say they’ve been to Siquijor but never left the resort to tell you anything about the island or the people living there.

Highlights of this laid back island are the Balet tree, old church and a stunning blue waterfall. Instead of renting a motorbike we hired a tricycle driver to take us on the day tour. Since my motorbike accident in Burma, I’m scared to ride on them. For 700 pesos ($15.00 USD) a tricycle driver took us to all three highlights and waited for us while we visited at each one.

Siqijour is known for it’s black magic and spiritual influences. Long ago it was believed to be a place where black magic was practiced often. This really peaked my interest. There are places you can go to have a spiritual reading or advisor. There are two kinds of witches that still exist on this island. They are the shamans and the sorcerers. The Sorcerers (aka Mambabarang) use their powers to inflict pain, disease or even death to their clients’ enemies. This cost anywhere from 6,000 to 30,000 pesos ($130-$650 USD). The Shamans (aka Mananambals)  who use their magic to heal diseases and illnesses caused by supernatural causes. Their “powers” come from supernatural sources like saints or the spirits of the dead.

I would have loved to have seen a Mananambal but there was no internet connection at the hotel so I couldn’t look up where to go or how to make an appointment.  Instead I bought a bracelet filled with an spiritual herbal mix and coconut oil. The instructions were to wear it to “ward off evil spirits”. It was also noted the bracelet will ooze oil when a supernatural presence is around.

The balete tree was large and really old. This tree is said to be 400  years old and enchanted. It is known as a dwelling place for supernatural beings. A small admission charge of 5 pesos (.57 cents USD) not only allows you to enjoy visiting the tree but use of the natural foot spa.  At the base of the tree is a concrete pond full of fish. This is known as the fish spa.

Water flows from underneath the tree which flows into the fish spa. Its a legendary mystery where the water under the tree comes from.  Visitors sit at the edge of the pond with their feet submerged in the water. Fish of all sizes swim right over to nibble on the dead skin of the foot’s heels, cuticles and callouses.

A small stand of food and souvenirs and magical potions are sold here. I saw  love potion for sale here. It said on the bottle to “never wear this to a funeral or at a cemetery.” I wanted to buy it as a novelty but I read it won’t get past the airport.

The  Saint Francis of Assisi church is centuries old and a landmark on the island. Built by the Spaniards this church was the only one on the island until the 19th century.  This inside looks like it hasn’t been touched since the 1960s.

When we arrived at the church a lady with a baby immediately approached me selling candles to light inside for prayer. I bought 4 of them and couldn’t wait to light them inside. I gave her the 8 pesos and felt good about my purchase. Unfortunately there was no where in the church to light candles nor was there any candles in sight. It was then I realized I had been scammed. When I left the church (10 minutes later) that lady or the baby was nowhere to be found.

The Cambugahay Falls, in Lazi looked like a piece of paradise. Blue water and a HUGE pond at the base. Locals were sitting on the top of the falls while tourists were swimming on the bottom. A swing was built to Tarzan into the pond from the ground. A group of tourists with a go pro were taking turns swinging into the pond. That was fun to watch for about two minutes.

This was a beautiful, peaceful serene place that hasn’t been poisoned by tourism. I’ve heard that a lot of Filipino people stay away from this island because of its black magic reputation. The local people I spoke to on the island said they love living here because it’s so peaceful. I can understand why. There is something about open untouched land around the sea that gives off a very relaxed feel. It’s a very spiritual sight to see in my eyes. After seeing all of the building up to the shores of seaside towns, it was great to see open spaces.