This beach is part of Krabi Peninsula.  It’s like looking out from high up at huge cliffs along the ocean with sandy shores at the bottom but no way of getting there by land. Because of the huge karst (limestone mountains), Railay beach is only accessible by boat.  It’s literally a cove they have built up with hotels and restaurants only. Leaving from the Chong Lad pier we took a long tail boat to Railay Beach. Riding on the Andaman Sea there are beautiful uninhabited karst protruding from the ocean floor. After a 15 minute ride we arrived on Railay Beach. There are two sides to Railay, east and west.

On the East side of  the island the tide goes out further and stays out longer. Swimming is impossible in this area. Instead of a sandy landscape, there are beautiful mangrove trees that have grown out of the sand.

There are shops and restaurants along the shoreline.  A walkway has been built along the shore for the high tide. The prices are a little lower for food and massage along this side.  But the old saying goes “you get what you pay for”.

Rock climbing is renowned sport here. There are many caves and high karst to climb on.  Amateurs to professionals can be found hooked up to ropes with a local guide throughout the area.

The beaches are serene and spacious. Being in a cove, this is a very private island. Large metal racks on wheels are used to transport supplies and luggage within the area.  Walking is the only way to get around. Since no motorized vehicles of any sort are allowed Railay is quiet. Long tail boats are along the shoreline in a sectioned off area. The boats add beauty to the island. In the morning, supplies for the hotels and shops are delivered from the long tail boats. Also, tourist going to neighboring islands are loaded up into many long tail boats to board a larger vessel further out in the sea.  Some tourist take a boat to Railay and just stay for the day.

Phranang Beach is my favorite beach in the world. Being there once before I couldn’t wait to see it again. This is the side that has the most action. The Phallus Shrine , monkeys, rock climbing, limestone formations close to the shore and long tail boats selling food and drinks are all found on this beach.

The Phallus Shrine is also known as the Princess Shrine. It honors Chao Mae Tubtim, a female fertility spirit. Women come here that are wishing to get pregnant. If their wish is fufilled they return and leave a phallus (penis) at the shrine.

This side also host the five star resort Rayavadee. Because this is such a high end resort, the hotel is built around the shoreline. Fortunately the beach is public. Even though the hotel is on the shoreline, they built this huge wall around the property so their guest would have privacy from the people on the public beach. In my opinion, this ruins the whole experience of staying at a five star resort on the beach if you can’t see it from your room. But I’m sure they probably make up for it in service or whatever. If their guest want the beach they have to come on out of the fence and sit with everyone else on the beach. Recently the Thai government doesn’t allow any chairs or umbrellas on public beaches. Food and vendors are not allowed to sell anything on this beach. To get around those rules, the long tail boats float along the shoreline and sell food out of the boat. Woks are in the boat to fry up noodle dishes and blenders to make fruit shakes. Genius!

There are many places that serve food. None of the restaurants were great but they really try to cater to the “western” crowd. Hamburgers, pasta and pizza are served at most places. The only Indian restaurant here had a huge sign out front advertising pizza and pasta. At first glance I thought it was an Italian restaurant until I looked up the rating on Trip Advisor and found out it’s Indian food. Speaking to a local resident originally from Australia, he advised us to read the reviews of some places before eating there. I’m glad I did. Some people got really sick eating at a few places. Because of my cleanliness paranoia we ate at the hotel most nights. I saw some things at the local places that I turned my stomach. One of them was watching a guy make a sandwich. He used his finger nails to separate two slices of cheese.

One thing I noticed inland is trash. I read a sign in one vacant area asking businesses not to dump their trash there. The charge is  500 baht ($14.00 USD) a month to have it picked up from the business. There weren’t any trash cans around for tourist to put their trash in either. Sometimes an over filled bag of trash was around and people just piled their trash on that and on the ground around it. Some areas smelled of fish and trash also. It makes me wonder if this area is equipped for the influx of tourist visiting or businesses for that matter. Staying along the shorelines and patched trails to the beaches are clean but inland is another story.

My animal report on Railay beach is birds, monkeys, cats, kittens and one dog. Of course I fed all of them. Except the monkeys. They were high up in a tree observing everyone. I tried to snap a few pictures but they left. One dog made his way around the entire island. Everyone gave him love and fed him. He popped up at beaches during the afternoon and restaurants at night. No one owned him and he didn’t have a collar on. 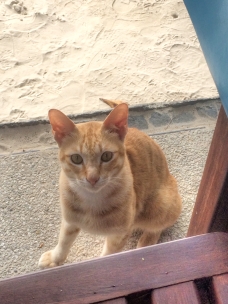 This is truly paradise on earth. It’s also the place I got bit the most by mosquitos. Every night I was scratching a new bite. The housekeeping staff leave the doors wide open while cleaning the rooms here. At night when the lights are on, mosquitos are in the room.  The mosquitos here eat right through the natural repellant spray supplied in the room. Luckily I had deat. That is the only thing that helped.